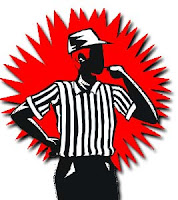 One of The Eye's main goals is to let you look behind the curtain hiding the operation of the city's government. You may remember the evidence room scandal that brought down Chief Gallegos. You may also remember that Mayor Chavez promised that heads would roll. (Apparently he meant head will roll.)

What you haven't seen yet is the attitude of those in charge toward those who had the courage to stand up and call attention to the whole evidence room mess. We have gotten our hands on some of the Blackberry messages sent between Deputy Chief Paul Chavez and Deputy Chief Fowler Johnston during the evidence room debacle. These messages reflect just how whistleblowers are treated by senior department officials.

They're both bitter hags who just wanna hurt people.

It's apparent that officers like Captain Marie "Sisi" Miranda and Sergeant Cynthia Orr are universally despised for calling attention to a problem that The Eye has found existed for many years. In fact, Albuquerque city audits had revealed serious problems years before Captain Miranda and Sergeant Orr had the courage to let the rest of us know about it. (You can read the recommendations here.)

As you may know, the Bernalillo County Sheriffs Department recently conducted an audit of the evidence room. Reports say that over $30,000 was missing, our Eyes on the inside tell us that that number may be higher.
Posted by The Eye at 12/16/2006 02:43:00 PM 1 comment:

They're everywhere at least in some parts of the city, taking pictures and sending out fines. At first it seems like a good idea; catch unsafe drivers and make them pay.

Eye on has looked into the newest tax Mayor Chavez and the City Council has devised in the name of public safety, the $afe Traffic Operations Program. You never voted on this tax; however, tens of thousands of you have already paid it or are guaranteed to pay it in the future.

Here is how it works:

· Mayor Chavez and the City Council have installed cameras at intersections throughout the city to catch citizens, it’s visitors and tourists.

· The camera takes a picture of your vehicle and then you; the registered owner receives a citation in the mail at a later date.

· You must pay this tax within 20 days or your fine doubles. If you choose not to pay, your vehicle is seized and held for ransom until you all fines are paid. You will also be responsible for all storage fees.

· These cameras are not 100% accurate. Meaning, you may not be the responsible party for the so-called red light violation. Someone else may have been driving your vehicle. Now you are stuck with informing the City and tattle-telling on your spouse, child, relative, friend, etc…

Lets not stop here! Mayor Chavez and the City Council have discovered that this is working very well and is raising a lot of hidden revenue for the City.

To avoid being caught running a light, people started driving through a green light faster so they wouldn’t get caught going through a red light, so another tax was added, $peed Cameras. Speed cameras were installed throughout next to the red light cameras; more hidden revenue.

Did Mayor Chavez and the City Council go as far as changing the posted speed limit at some intersections? For example: Traveling west on Menaul approaching the intersection of Menaul and Wyoming, the speed limit has always been 40 MPH, it is now 35 MPH approximately 100 yards before the intersection.

If you get caught for speeding you will pay:

Again, if you don’t pay within 20 days the fine doubles. If you refuse to pay, your vehicle is seized and held for ransom.

Had enough? Sorry, there’s more. The city has 3 speed vans, which are driven and hidden at different locations throughout .

Eye on has asked over 100 law enforcement officers if they are in favor of this new tax. All of them responded, “No, we are getting them while working when responding to calls.” Those are your calls that they're talking about. Your safety that is being placed in jeopardy because officers won't risk having to face disciplinary action for running a red light on the way to a call. Officers receive tickets even if they are running code (with lights and sirens)!

We think this new tax is outrageous. These cameras are incapable of using judgment or common sense. For example: What if you are a parent and your child is very sick and you are rushing to get them medical attention? Or you just lost a loved one, a job, or are just having personal problems? These things happen to all of us; after all we are only human. These cameras are just like the Mayor and the City Council; they do not care.

At a time when it is expensive to put a gallon of gasoline in your vehicle and heat your home; do we really need a new tax we did not approve? We feel sorry for the single parent who can barely put food on the table and make ends meat.

Chief of Police, Raymond Shultz, tried telling the public it is about Public Safety. Is that really the honest answer or is he afraid to speak the truth; “It’s about fleecing people out of money.” Chief Shultz also said he wanted to change driving habits. Well he has, people seem to be taking side streets to avoid these new tax cameras. The problem is these streets are not designed for heaving traffic flow. Also, traffic is entering our neighborhoods where our children are playing. Does Chief Shultz consider this a Public Safety issue?

What to do if you get one of these tickets:

· As soon as you get a ticket in the mail, request a hearing. Send this request through registered mail to make sure no one says it was never sent or received.

· Call Mayor Chavez and the City Council to inform them, you have a right to vote and you will exercise that right. Remind them, “We the people, for the people, by the people.” Let them know we are the voice for their future.

Where does the money go? The fact is we do not know how much money has been collected or where it is being spent. The city has claims that within 6 months they will have 36 intersections covered.

Be ready for the city to spin this issue. They've already begun. You can be sure that The Eye will be watching. More to come!