IN THE TRADITION OF DISSECTING THE QUITTING LETTERS BY THE COWARDS WHO RUIN THEN FLEE APD..... 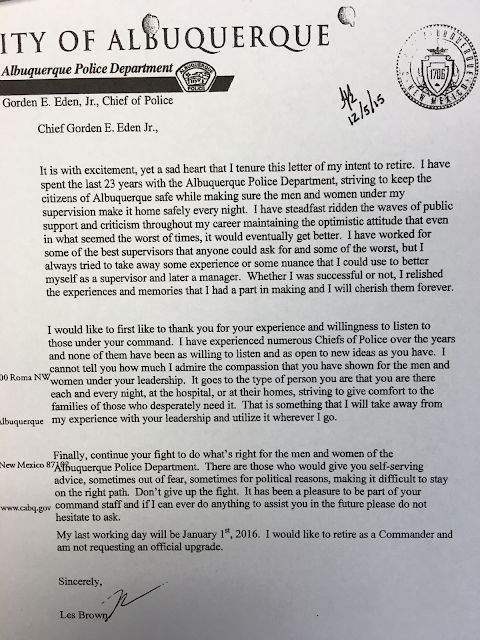 We have been fortunate enough to get a hold of this little gem, which provides us a glimpse into the warped, and twisted mouth of madness running the Albuquerque Police Department into the ground.

Here is a letter written by former uniform hanger, SID commander Les Brown. Reading this colorful, fantasy, laced with unicorns, and rainbows, one would think this guy was skipping to the loo, into the sunset, but the fact of the matter is he was running like hell before the Brachle debacle came to a climax after he recommended Brachle's upgrade to acting commander.

The types of people that write these letters can be seen right through, just like those slimy formless jellyfish they resemble. You see, these frauds like to fool everyone into think they are just the greatest folks there could be, when in fact, they were the problem. The audacity they exhibit is beyond imagination and incredible, and like a jellyfish, these people take the form of whatever environment they occupy for the time they are occupying it. This is the reason for why an ex police chief can obtain an assistant police chief job in another police department, while he is being investigated for white collar crimes involving pay to play, no bid sole source contracting, bid rigging, and lying under oath countless times during his career, not to mention timesheet fraud and evidence theft. These same "police executives" can land new, high paying careers in law enforcement after being investigated for things that would destroy the careers of anyone else in any other career, for just being investigated, let alone disciplined for, but not the "police executive." You see, the police executive is beyond reproach, and the police executive is America's new cartel. This is the trending pattern in public corruption these days, and it involves men and women who are only concerned with money, nature at play, and walking on people to get what they want.

The irony in this letter in not the blatant sentimental fraud, but the quitter running away, and telling a liar to essentially keep destroying the place, because that is what is happening. These people are so arrogant and warped that they really think they did well here, when in fact they are the reason The Albuquerque police department is in meltdown. They are the reason for the corruption, and like a cancer, and they are being allowed to spread their way of doing things across the country.

You get an A+ for creative writing Mister Brown. You did not fool us though. We are not into fiction here at the Eye. For you we will revisit an old saying. Adios Donkey!

Until those responsible for the corruption, the turning of a blind EYE, the covering for official corruption, the lying to the public, courts, media, and federal government, the retaliation, the witness tampering, the ongoing manipulation, game playing, and juvenile conduct are made to answer for their conduct, and pay with sanctions on their ability to cash in on their malfeasance, the light shining will never end.

We encourage the outpouring of cooperation in letting the truth run free.

Stand by for the next article, where we will discuss the Albuquerque Urinal, and how they are the Hanoi Hannah of the Berry administration.
Posted by Stealth at 4/13/2016 07:39:00 AM 63 comments:

Albuquerque rapid transit project ( A.R.T. ) the project that nobody wants except Berry and his elite power brokers .

If there is any doubt in your mind all you have to do is attend one of the hostile A.R.T. Meetings where the citizens are calling the City thieves and Gestapo with the City representative yelling back at the citizens they are suppose to represent .  We at the EYE ask where is Berry ?  Does Berry not have the courage to attend the meetings and face the Citizens Of Albuquerque on his pet project ?

We at The EYE remember all the protests when Berry wanted to build a trail in the Bosque .  Well now that he has been reelected by his power brokers ( MOST OF THE REST OF YOU DON'T VOTE ) he is building the trail.  Berry will do the same with A.R.T. Berry knows he can get away with it because he knows that our Citizens don't vote in local elections. Despite the lawsuits that have been filed A.R.T. will be built putting small business along Central Ave. and the area out of Business.
Neighborhoods will be destroyed  and we at The EYE wonder who is to gain.  The City states they hope to attract more bus riders. REALLY ! You Berry are going to destroy Route 66, destroy small business , and destroy neighborhoods in the hope of attracting more bus riders.  Someone is going to gain big time.

For years there has been rumors that Mrs. Berry owns a business that supplies temporary workers to the City and that she has construction contracts with the City.  The rumor is very strong among City Employees and this rumor creates a lot of smoke.  Is there fire to go along with the smoke ? Who IS A.R.T. going to fill the pockets of ?  Who are the contractors involved ?   Who donates to Berry for his elections ?  We at The Eye have often wondered why out of State people donate to local elections.  You can bet they want and are receiving something in return.  We at The EYE would like to see someone like The Albuquerque Free Press follow the money.  We at The Eye don't always agree with the Albuquerque Free Press however they are not afraid  to call out the politicians and sine sunlight on their escapades. Albuquerque things will never change until you change and start voting in local elections.
Posted by Stealth at 4/12/2016 01:26:00 PM 3 comments:

IN THE SPIRIT OF LEAKING MATERIAL CONCERNING THE LACK OF INTERGRITY WE ARE NOW POSTING JESSICA TYLER'S LEA-90 BECAUSE WE ARE TOLD SHE AND EDEN AND MAJ. MONTANO CONTACTED THE SHOOTING SUSPECT FROM THE PHO DOUBLE HOMICIDE AND WERE CLUELESS ON WHAT TO DO WHILE THEY WAITED FOR BACKUP AS THIS SUSPECT KILLED HIMSELF... 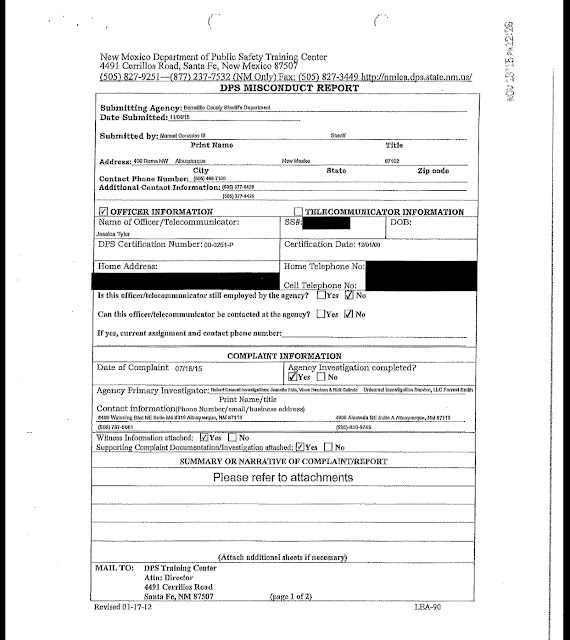 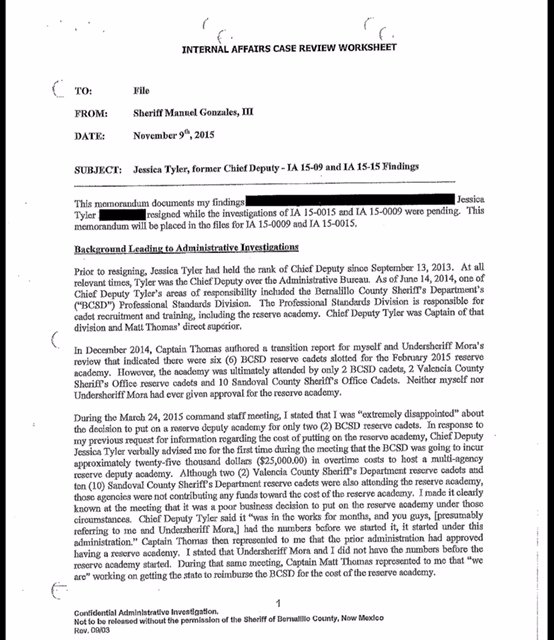 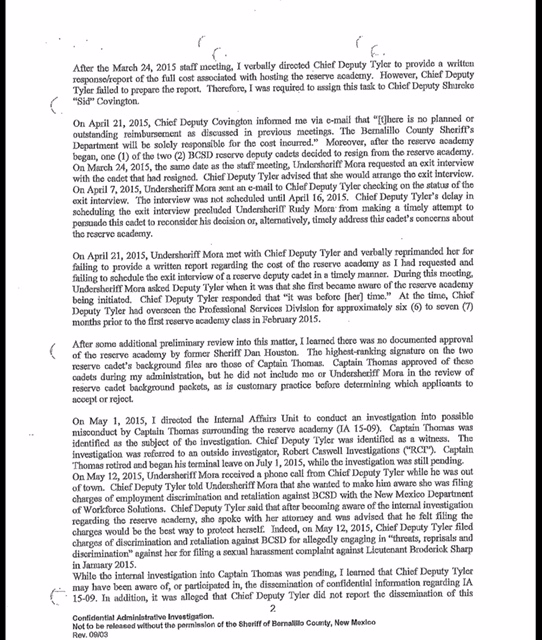 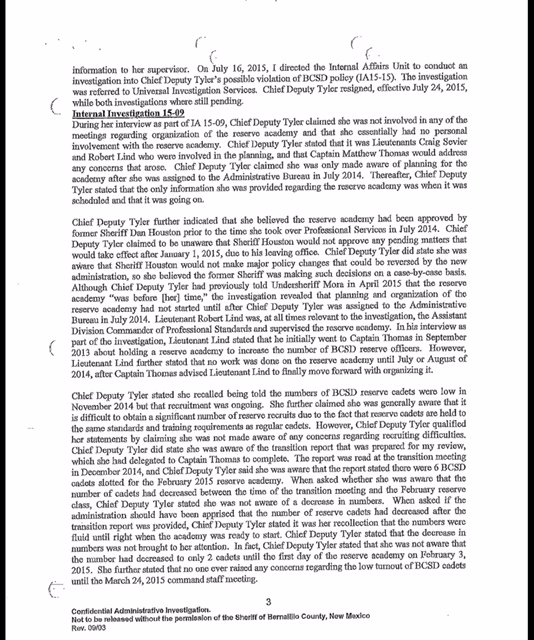 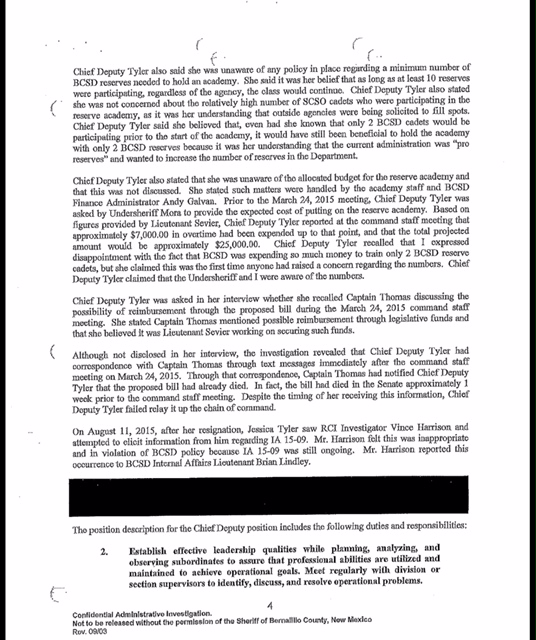 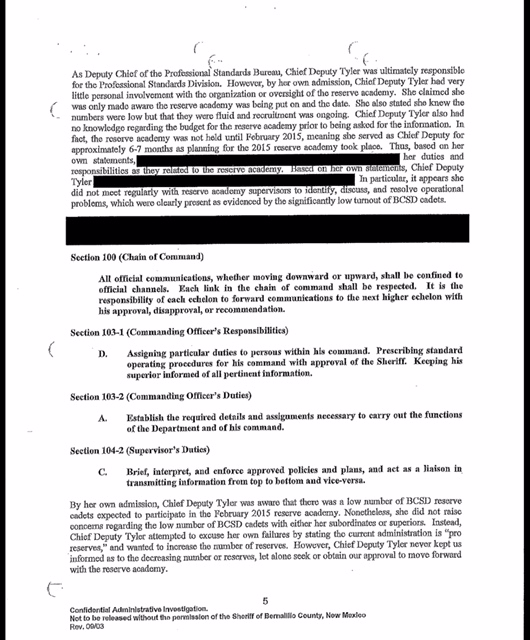 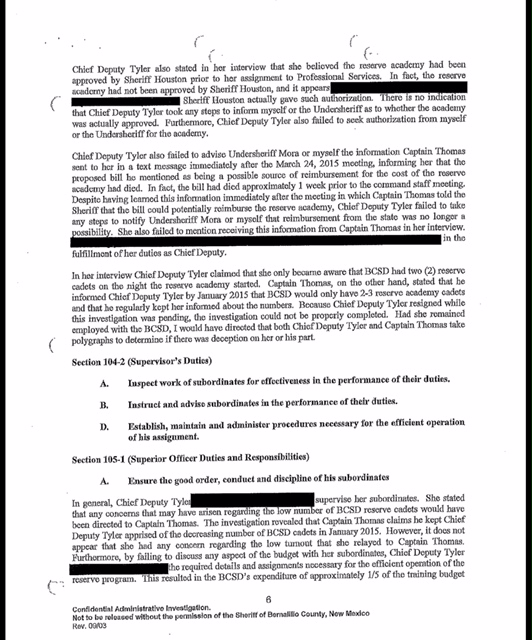 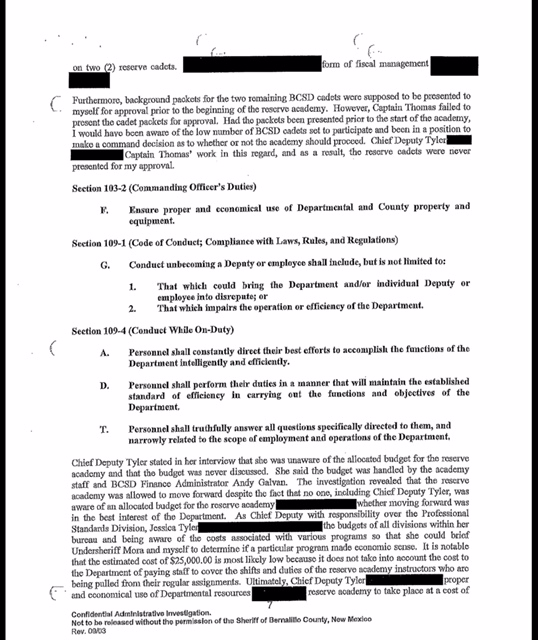 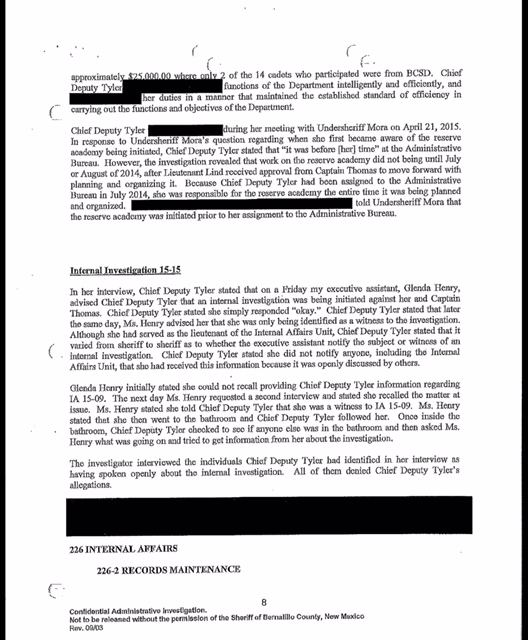 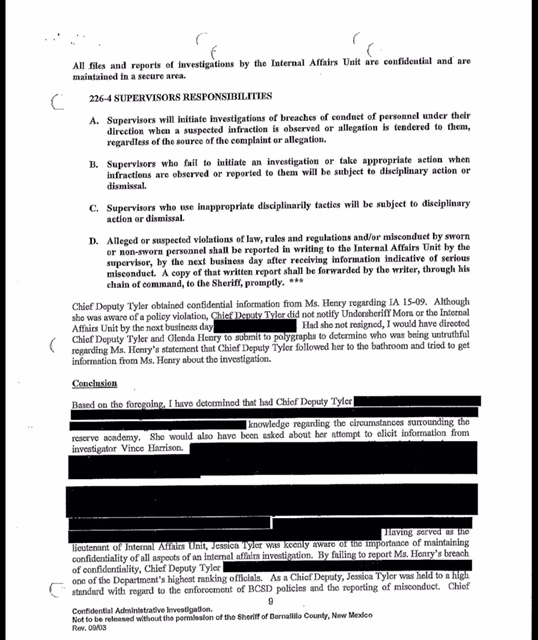 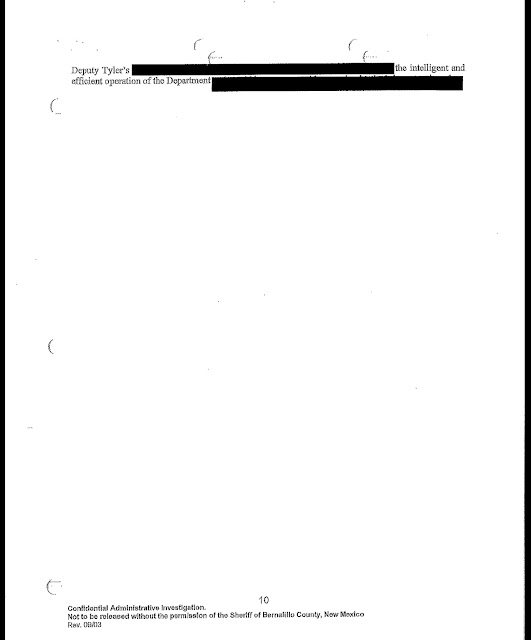 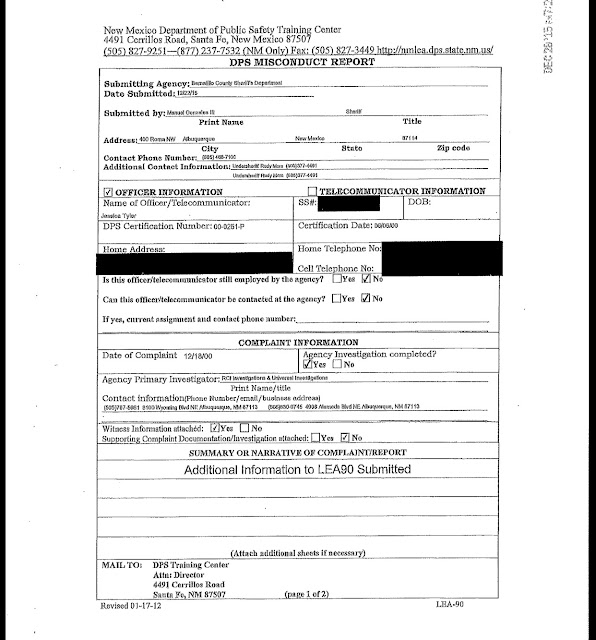 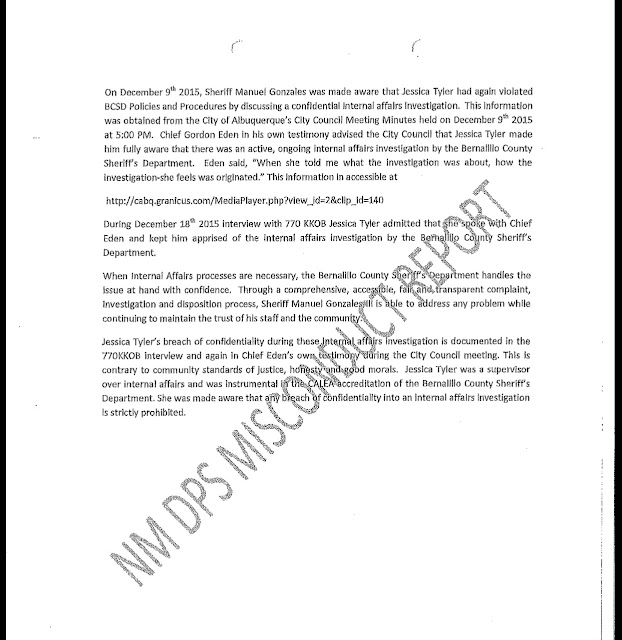 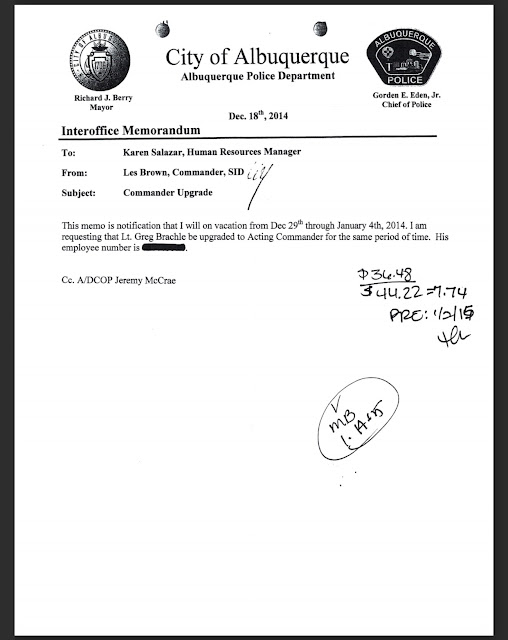 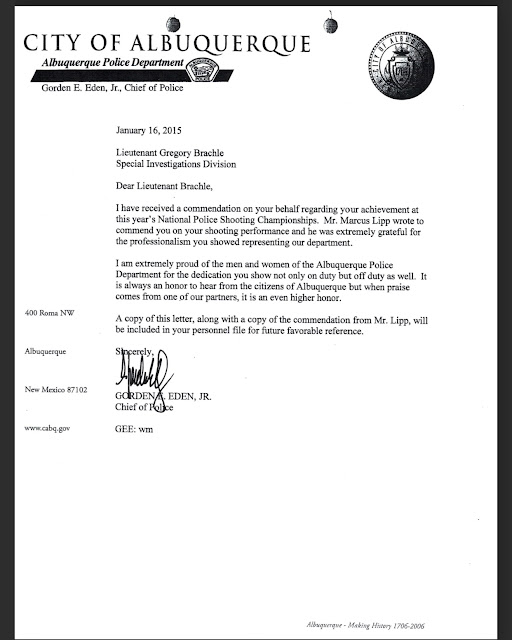