“Days of Darren; Again!” His Target is the Mayor’s Office

Soul for Sale! You heard it right; the nefarious Darren White has reared his ugliness again. And this time his ultimate target is the Mayor’s Office.  You see White can’t make it here in the Duke city without having some type of political power.  So his strategy is to run for city council and then for Mayor when Curly leaves.


If you recall, the nefarious Darren White was once elected as Sheriff of the Bernalillo County Sheriff’s Department.  Folks this is the difference; White was the “Sheriff”; he was not Darren White who happened to be elected to Sheriff.  He desperately needs a political office in order to be someone otherwise is he a no-body.  Being able to hold an office clearly defines Darren White.  White is best suited to be Susana’s Little Tidy Bowl Man or a parking attendant in Lordsburg, NM.  In other words, he needs to stick with what he knows.


Since our insiders in the R’s are telling us Trudy Jones is not going to run for re-election.  This is a blessing because she reminds us of #1 in our book because you cannot get any closer to being a big fat Zero than number one.  White has been trying desperately to gather signatures to get on the ballot but our Eyes are telling us it is not going as expeditiously as White was hoping.  So we are wondering if White has already started to make certain people promises as act of desperation.


We all remember White resigning in disgrace and taking off to Suffork, NY.  This was after the alleged DUI crash involving his wife.  As you recall White went out to the crash on City time as the Chief Public Safety Officer using emergency equipment; he muscled his wife out of the DUI using his political position.  Remember Kathy White admitted to popping pills and having blurred vision when she crashed? The nefarious Darren White’s responded to the Journal by stating, “People are using my wife’s medical condition for cheap political attacks.”  Berry has called for an independent investigation into this matter. Guess what the results were…


Remember Tru-Touch? The $1,000,000.00 DWI machines White said were working great; only to learn when Houston took over the machines were never used and were merely paperweights in a closet at the Sheriff’s Office.


Anyone remember Brad Ahrensfield?  Darren promised him he would handle the entire FBI persecution of Ahrensfield. When it came right down to it White put his tail between his legs and hid.


The entire DOJ fiasco started when White was at the helm as the public safety director. We all know how that is playing out.


And remember Darren White tramping through the crime scene of Civil Right Attorney Mary Han?  He had absolutely no business there! White did not respect the dead and now he wants to go back into public office?


Remember when White was being a tattletale and acted childish and decided to report ADA Drager for a post that she placed on the “Fans of APD” Facebook page. Starting a fight with the DA’s office? Yes, it is true.


Remember Sam Costales who was a whistle blower on the conduct of the Bernalillo County Sheriff’s Department mistreatment of one of the Unser family members.  Darren White asked Ray Schultz to harass Costales which resulted in a settlement of over $300,000.00 from BCSO on behalf of White and an additional nearly $600,000.00 from APD.


And one of the most slanted people we are told in the R party is Jason McCleskey.  Guess who is operating behind the scenes for White.


These are only a partial list. As time moves forward we will expose many more items to show the public the truth.


People need to know the facts before they decide who they want in City Council.  As the snakes start slithering out to feed we will point them out to you.
Posted by Stealth at 3/23/2015 08:29:00 AM 36 comments: Links to this post

Did Mayor Berry Leave an Innuendo Inferring APD is Incompetent?

Local media are reporting on the final results from the death of a Tasmanian Devil from the City’s Bio Park.  Your Mayor Berry authorized a separate investigation by an outside vender.  Does the authorization of an outside vender infer that the boss of the city feels APD is incompetent?  We will give you our opinion but the real decision is yours to make.


While being interviewed by local media, Berry’s Chief of Staff, Gilbert “Puffy” Montaño, statements infers APD is incompetent.  Montaño claims arose from the mayors’ approval of using an outside vender to investigate the death of a zoo animal at a cost of $9,000.00 to the tax payer.  “Puffy” confirmed the outside vender’s investigation was separate from APD’s investigation.


The question is why?  Why was it necessary to conduct an outside investigation if APD was already in the process of conducting a criminal investigation?  Berry has repeatedly lauded how wonderful APD is and how confident he is in the leadership of APD.  On a common basis APD conducts thousands of investigations including investigations of rape and murder of human beings.  The inference here is Berry really believes APD is too incompetent to conduct a simple investigation into the death of an animal?  Thus, this situation required an outside vendor to step up to the plate and do the real police work?


The cost of telling the city the case is “unsolved” was free from the beginning. Why did the tax payers have to dish out $9,000.00 for the same results as what was already known?  Oh, that’s right; Caswell and Associates reported to the City the Bio Park officials do not know what they are doing. This was already known and we are sure from the start the APD already notified the City of this well-known fact as well.  Remember the Bio Park staff is also an extension of Berry’s administration.


If the City and/or the Bio Park felt a need to have a risk assessment study conducted, we are sure this could have been done at a fraction of the cost.


Since Berry runs the City like a gangster and is always putting a positive spin on all the evil and bad things him and/or his administration do daily;  we thought perhaps we could call Berry “wrinkles” or “Berry Curls”, Perry “Red Face Baboon” or “No Neck Perry”, Montano “Puffy Cheeks” or “Blowfish Montano”, Eden “Jellyfish” or “No Leadership Eden”, Levi “Jabba the Hutt” or; or “Jabba the Hutt”, etc…You could put the initials of Berry and Montano together and that could be accurate.  We understand that is not possible because Albuquerque doesn’t have any gangs…Right?


Please let us know your favorites…


Our recommendation is to spend the money and fix all the issues at the Bio Park needed to protect what the City has been entrusted with.  The lives of caged animals lay firmly and completely on the City’s shoulders; the City placed them in those cages and the City is responsible for forcing those animals to be dependent upon the City.  The City created this problem; so skip the ice skating rink in Civic Plaza and the rest of the publicity stunts.  Spend the money on what the City is already obligated itself to do; defend, protect and serve those animals.


The roots of the problems originate back to the Berry Administration and the lack of leadership. The true incompetence starts at the top and trickles down.  It all started with Berry and the selections Berry made in creating his administration.  We are sure APD is more than competent to handle a simply investigation of an animal.  And yes, it strongly suggests APD is incompetent which is not true except for the people whom Berry has put in charge.  The hiring of this outside vender is a slap in the face to APD. 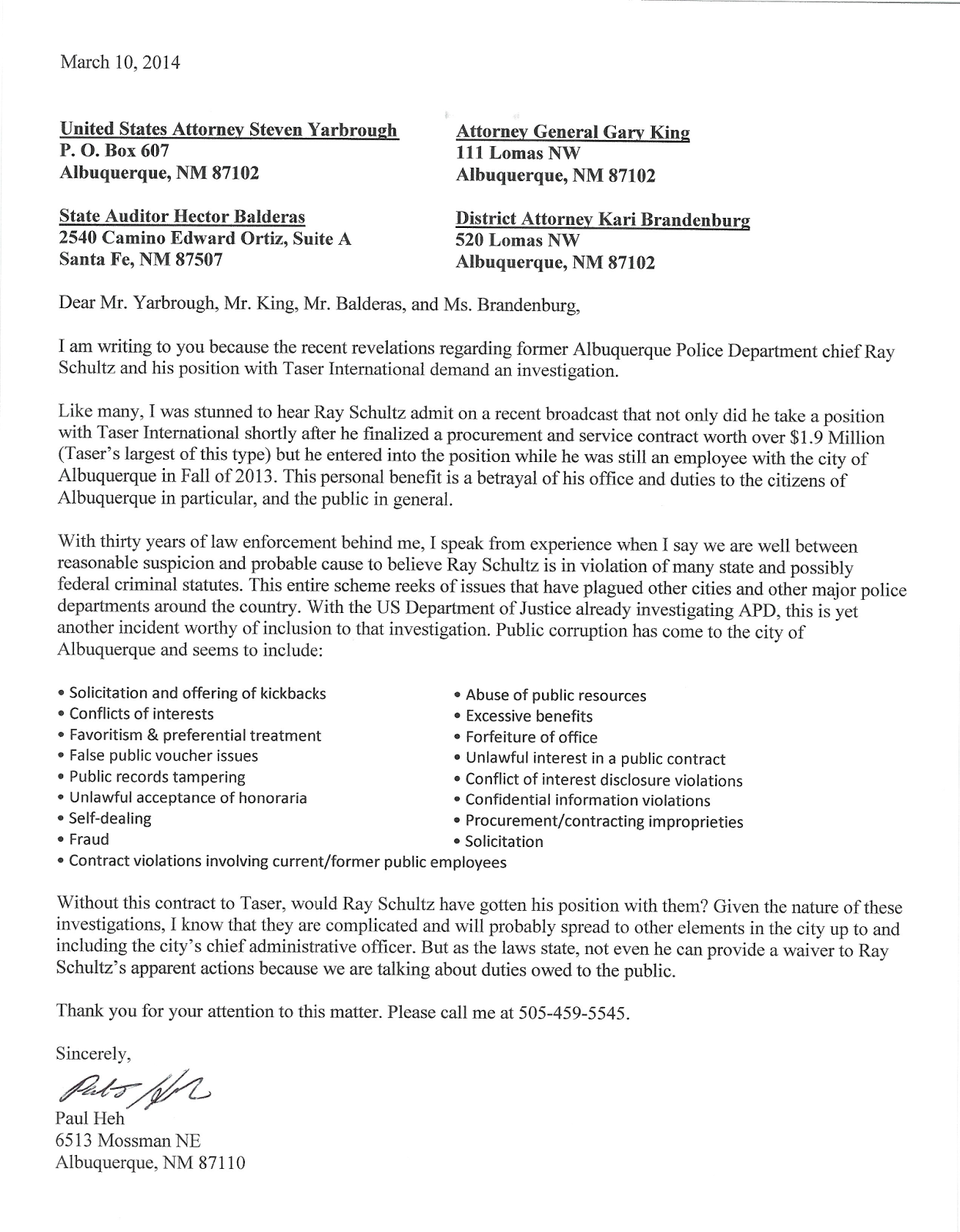 ONE of Albuquerque’s Super Bowl Sunday murder cases involves one of Berry’s own supervisors David Ulibarri. You hear people constantly complaining about nepotism and favoritism within the City of Albuquerque, well, Ulibarri will prove to be the ‘poster child’ for this assertion.
According to our Eyes on the inside (yes, we have Eyes at the Transit Dept. too) the Super Bowl Sunday accused murderer was indeed a supervisor for the City of Albuquerque in the Transit Department. Here is what our Eyes have told us. Ulibarri’s wife Bonnie Ulibarri is also an employee at Transit. We are told Ulibarri’s wife “greased the wheels” to get her husband into city employment and to get Ulibarri promoted to supervisor. Yes, we know; it is ironic Ulibarri is an outlaw biker and his wife “greases’’ his way to stardom.


Here is where it gets interesting.  How did a person of let’s say, questionable character and now accused murderer become a City employee and how did he rise above the rest of the truly deserving applicants for the position of supervisor?
Apparently being a known biker gang member and drug dealer did not hurt his ‘opportunities’ to be hired and promoted. According to the story on KRQE When question about Ulibarri and the other thugs, APD’s own LI’L Junior (Tanner Tixier) Stated, “They are known to partake in numerous criminal activities including the sale and distribution of narcotics, and then as a caveat to that they resort to violence to further their drug trade.”


Is this the ‘new’ Republican idealism? Suzanna; you really need to reel in curly.


Here we are again dealing with inept leadership. Again, the citizens of Albuquerque look like fools but then again Albuquerque did elect Berry and have endorsed and embraced his bad decision. Way to Berry! Keep this in mind; Berry wants a higher office in the future.
Posted by Stealth at 3/05/2015 06:48:00 AM 14 comments: Links to this post