In the aftermath of Friday's story on disgraced former Albuquerque Police Department chief Ray Schultz's opportunistic, and seemingly criminal, actions with Taser, we thought we'd do a little digging of our own. I mean, we hate to be a free party "Stingaree"

You see, if there's one thing we know about Herr Schultz, it's that not only does he like to tell everybody what to do, but he likes to remind us how smart he thinks he is. "One of the things..." was always a great Schulzian remark that always preceded something totally distorted. You know, he'd say something like, "One of the things we're doing is connecting with the community." And what that meant was anybody's guess. But regarding Tasers, we found some interesting comments...


1. “With the number of encounters we’ve been having recently, we decided that we have this good tool (Tasers) and we want to make sure that every officer will have that option available to them as a measure to de-escalate a situation short of the use of deadly force” Ray Schultz, 6-8-11, Abqjournal


3. Schultz sends a note to Taser salesman Grayson about his last day with APD on September 6, “FYI. I will still have the ear of the Mayor/CAO on department issues. As for the TRC (Technical Review Committee) meeting, everything has been greased so it should go without any issues. If there’s anything I can do for you or Taser, especially to talk about my/our experiences, please let me know”  Ray Schultz, 8/28/13 in emails to TASER.


4. "After testing and evaluating several different systems we decided on the AXON flex Camera System and EVIDENCE.com service as our video management platform." Ray Schultz in 10/7/13 TASER press release on 10-7-13 (http://investor.taser.com/releasedetail.cfm?releaseid=795149)


5. “I’ve had a chance to go out and talk about technology and how it’s changing the face of law enforcement. I actually started after I retired so I started talking in October. After I retired, they asked if I’d be willing to come and share some of our experiences so I agreed to do that. I’m not in sales. I just talk about lessons learned and it’s up to individual agencies to decide what they want to do.”  Ray Schultz 2/28/14 KRQE

6. “I did use a poor choice in words in my email to the Taser account representative. All proper purchasing and review procedures were followed.” Ray Schultz4/23/14 KRQE
7. “I have not violated any City regulations by doing contract work for Taser.” Ray Schultz, 4/25/15 KRQE 4/25/14

Retired APD sergeant Paul Heh, offered this quick response when asked about these comments by the former chief. He told us:

I'm not just pretty sure if this were presented to Schultz in an IA interview he'd be fired for untruthfulness, I'm very sure. It's very very clear to me, especially with this new information, this whole things HAS to be investigated. I spent a lot of time looking at city, state, and federal statutes and this thing stinks of scandal. Many of the following laws seem to apply:

Without this $2 Million contract to Taser, would Ray Schultz have gotten his position with them?

Then there's this little gem of an article from the March 2014 issue of FBI-LEEDA, written by none other than Ray Schultz... 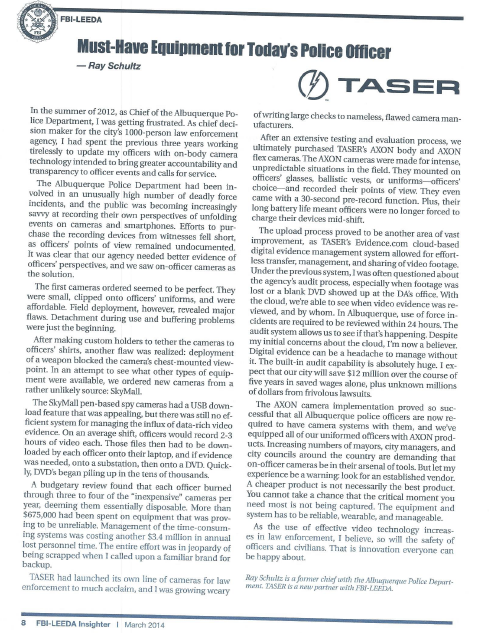 Of course it is nothing but a promotional piece for Taser and their AXON cameras. Hey Ray ruined the Albuquerque Police Department, he's on his way to ruining Taser International as well.

But you see, things don't stop there with Schultz. He's a creature of his own habit. And as we've seen him feather his nest with what he did on the public time clock with Taser, so seems to be the case with ARAPA. You know, it was the brain child of Ray Schultz and....um.....coworker Karen Fischer. Also known as the Albuquerque Retail Asset Protection Association. A few years ago, Schultz wrote an article for them as well. And in it, he said some rather self-revealing words:

“Criminals are opportunists. Whether they steal from a store, break into a car, burglarize a house, or steal copper from a construction site, we can best detect their crime through collaboration. Public-private partnerships provide for a more effective means to solidify public safety. As law enforcement, the challenge is to change the way we engage our community, and to be willing to let you join our crime fighting strategies”  Ray Schultz and Karen Fischer, 4/1/12

We'd say its time for some collaboration between the State Auditor and the FBI to fully investigate Ray Schultz....and Karen Fisher too.