The City Council is set to receive up to a 100% pay increase. Ironically, this is while the rest of the City employees received a pay cut. Does anyone see a problem with this? Here is the difference; Councilors asked to be public servants and ran for election. Councilors’ completely knew what the compensation package included. City employees are hired to provide a service in exchange for compensation to support themselves and their families.

The thought that any City Councilor would even consider taking a big fat grease pay increase (equal to doubling their salaries) need to resign and allow a true community leader to step up and take over. All of City Council should in good conscience refuse any increase until all City employees are made whole with full consideration.

In the Journal article, Commissioner “Joe Conte said that, even with an increase, the salaries of elected officials would amount to less than half a percent of the city's budget and that leaving the salaries low could discourage people from running for the job.” Another Commissioner, “Ellen Driber-Hassall said the council may not draw a wide selection of candidates if the pay is too low. She said she prefers an increase to between $20,000 and $25,000.” Really? How many of you heard about the crisis the City was having because there was no one who wanted to run for office? What is Ms. Driber-Hassall calling our current Councilors?

This appears to be hogwash, all elected officials asked to be on the Council. No one is holding them hostage; they are free to go whenever they want.

If the increase is given, it will take effect starting next election. Albuquerque voters had repeatedly turned down a pay increase before for the City Council. The Citizens' Independent Salary Commission is appointed by the mayor and city councilors by a roundabout proxy system.

Since Berry has taken office the Albuquerque City Council has done very little to earn their keep. The Berry Administration has run amuck, unchecked and unbalanced. Councilors; if you want this big pay raise step up and do something!!! 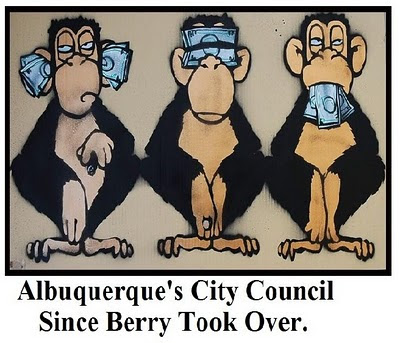 When's the next city council meeting

This is insane...If the city councilors did their job, and stopped the corrupt behavior that was occurring in the Mayor's/White's/Schultz office, then I would say let them have a raise...not what they are asking for, but something. However, they aren't doing crap. Big deal, a few of them supported the take home car progam...so what?! I would rather see no cars and have the right people running the city. Once again, more people that we voted for and they are not working for us. Things are going to hell in a handbasket, and quick!

Contact YOUR City Councilors and tell them that you disapprove of their raise! Ask them to respond to your email. The next City Council meeting is Monday, March 21st at 5pm. If you go early, you may sign-up to speek for two minutes.
http://www.cabq.gov/council/councilors/contact-all-councilors

Did everyone forget we have five Republican Councilors now. First time that's happened in years. So with a majority vote, Berry and Darren get a pass. At least the council would take on Marty once in a while. This cast of this nightmare are too afraid of the Republican Party, that which, in itself is a joke. Berry is just a puppet and Darren is his master.
Darren cut the same deal with Marty until the pole numbers changed in Berry's favor. He was solid in Marty's corner until that moment late in the race.
Shhuussss.
don't let RJ know that.

HEADLINES OUT OF MIAMI;
Read full story on FANS OF AP

Mayor Carlos Alvarez was ousted Tuesday by voters angry over a property tax rate increase and salary raise for county employees in a county struggling to recover from the recession. With 100 percent o

Take heed Mr. Mayor.
Not saying Councilors don't deserve a little bump, but now is not the time, and paying TJ Wilham
the money his making is a travesty.
It doesn't bode well for the people who are actually working for a living.

So it is more important to raise the council pay than to pay the people that make the city work,the city employees. Everyone at A.P.D. and A.F.D. that can retire will retire before the next contract. By the way mayor your secret is out about taking away Police and Fire cash-out. You know mayor the cash -out that A.F.D. and A.P.D. have been promised at the time of hire as a benifit and worked for for 20 plus years.

Hey tj how is your new created job? The city council will get a raise I think you deserve one too. You should go to darren and just say I need a raise or I will squeal like a pig!

RJ, SOON YOU WILL TRY TO BE REELECTED. THIS WILL NOT HAPPEN. TITO KNOWS YOU AND DARREN ARE FOOLS AND WILL BE LONG GONE. YOU SHOULD HAVE LISTENED TO HIM. HAVE A MISEABLE LIFE. MARTY; JUST LET US KNOW WHEN AND WHERE. TJ, GO DO YOURSELF AT TACO BELL. WHAT YOU ARE DOING IS A SIN!

Does anyone question that the fact that TJ has a job, because of extortion. If he has information that is damaging to Darren and possibly Roy or Berry, doesn't anyone realize that maybe, just maybe, that is wrong?
Is withholding information of wrong doing just as bad as a lie? Is it not a criminal offense?

We have a council of cowards. Not one is worth a damn. Has any one of them questioned TJ's cush/hush job? Or Darren's role in TruTouch and the Brad Ahrensfield case? Not one.

Cowards, you do not deserve more $$. You don't deserve the positions you hold. You're a joke.

Yeah, Tito wasn't happy with Darren being picked. he would well be advised to inform Heather Wilson not to accept White's endorsement.
Berry's endorsement is meaningless as well as the 'Right Wing' of the Republican Party can't stand any of them.

Now is not the time to be asking for a raise. City is in the RED and should be looking to cut costs not add to them.

Of course all of this is wrong...we all know it is. The real question is this: How do we stop it? All the emails in the world sent to the councilors and to the govenor etc are not cutting it. These politicians obviously don't care. Unless Berry resigns, which he won't, we have to put up with this crap for 3 more years.

Ken Sanchez for Mayor. NOT!!!

Don't fool yourself. Berry is scared to death of a recall, not that it would pass but it will always be there on the internet.

When is this Ahrensfield appeals case going to give birth?
Brad ????

Curious; why does Berry not see Darren for what he is? Is he that blind?
Surely he knew that Darren was solidly in Marty's camp prior to the election.
They are still best buds.
If I were mayor, that would bother me.

Berry's a self absorbed jackass. He gets his own meatballs because he's afraid someone will spit in his food if he's not looking.

Marty will never run again for Mayor. He's enjoying his new gig too much. There's not one member on the City Council who is up to the task or certainly worthy and none of the Republicans will run against Berry for fear of retribution from the Party.
So where does that leave us? Someone out there MUST be capable, financially solvent, possess integrity, has name recognition, and the ability to bring ethics and morals back to City Hall. Is there such a person, either Democrat, Republican or Independent? Someone who is not part of this Berry/White circle of jerks.(maybe not a politician at all) The last time there was any decency in the halls of the 11th floor, might go as far back to the days of Harry Kinney or David Rusk.
The three terms of Chavez was certainly full of its share of cretins, but this Berry guy was supposed to be a different breed of cat. He convinced everyone he was Jesus-like, an upstanding pillar of society, religious, FISCALLY responsible and a fair and honest man who promised to bring 'Civility' back to City hall.
What we got, is a fraud and a liar.
And we thought Obama was the 'Manchurian Candidate'.
Fool me once, fool me twice......

Picket City Hal and Police HQ until the council does something.

I'm all for a picket I didn't know they had one last week or I just missed the publicity.

DAVID RUSK WAS JUST LIKE BERRY, THAT IS WHY I KNOW HE WILL BE A ONE HIT WONDER. CHIEF STOVER DID HIM IN.

Yea, Berry & White are trying to screw us out of pay, but why is no one talking about the person/people who we pay to defend us in situations like this? Oh that's right. According to Joeys own office, he's been in one on one meetings with the chief a lot lately. Guessing its not APOA business if the VP isn't allowed in these meetings. I wonder what those two are plotting to screw us on next?

Stover, now there was a Chief for you!