Over the last weekend, your lovable Eye received the following post from an unknown "anonymous" person:

We found this comment rather ironic given the recent events over the last week. From the $1.2 Million dollars spent on settlements; the gross, if not criminal, conduct by CAO Rob Perry and Assistant Attorney Greg Wheeler, and the broadening of the DOJ's investigation of APD and the city.

All of that in just the last week!

One of our Eyes sent us the following video which gives us an idea of why Mr. Perry was so upset at last week's city council meeting: 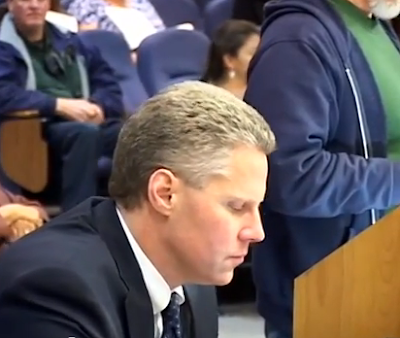 At the podium is a citizen berating city attorney David Tourek over recent comments concerning the Han family's case which is still pending against the city. A case where Mr. Perry himself is named individually as a defendant.

And as far as the "Eye's Plan," we have this to say: we have no plan. Never had one. Never will.

We are just a mere spotlight casting a beam upon things that, though they affect all of us here in the city and the state, would prefer hide in the dark.....

Paul Kennedy walks away with another settlement from the City costing taxpayers $300,000 with the City claiming it is paying what it would cost to pay a private attorney to defend the case. Really? Another Rob Perry and Kathy Levy special no doubt costing City taxpayers with Berry having no clue. You should NOT need outside council to defend the City when it employs over 30 attorneys. Problem is all the City Attorneys are afraid of a Courtroom. Rob Perry use to office with Paul Kennedy and Kathy Levy has always had a cozy if not creepy relationship with Paul Kennedy.

Kathy Levy thinks she is some sort of great trial attorney even though she is one of the most sanctioned attorneys by the Federal Judges. Wonder why Perry and Levy are not as quick to settled the Mary Hahn case? Could it be that Paul Kennedy and Rob Perry were both at the Mary Hahn death scene? Also, Steve French who is defending the City in the Mary Hahn case is a Republican operative and the brother in law of City Attorney David Toureck, also a Republcan who does Rob Perry's bidding.

Paul and Joe Kennedy are brothers and during the first two years of Berry's first Administration walked away with over 2.5 million dollars in settlement from the City after Rob Perry made sure Berry changed the no settlement policy. Paul Kennedy was a major contributor to Berry and also did a fund raiser for Berry's re-election. Steve French went to the Paul Kennedy fundraiser for Berry' reelection. After the re-election French made sure he got his brother in law City Attorney David Toureck to give him a contract defend the Mary Hahn case. Talk about a cluster costing taxpayers money benefiting Republican operatives Perry, Kennedy, Toureck and French. But no one in the media, especially the Journal really cares.

LOL, I love that shot of Wheeler!
He looks like a glaring little piggy.

I agree with the first comment, You have hit the nail right on the head, and you are not the only one who sees all the corruption going on .

The DoJ needs to investigate the kick back that is going on from Berry to Kennedy. The first poster connected the dots. This is a major scandel that should be exposed. Anna Velasquez are you ready for your next major report?

Kickbacks? The king of kickbacks is Nate Kornfield and Kaufman's West. Only Korn gets SOPS written for certain gear when his shop is the licensed distributor of the same certain apparel and equipment....

To Jan.15 7:21 A.M. I ASK A simple question. If you have proof I would like you to bring it forward. Mr. Korn sits on the State Law Enforcement Board. In my opinion Mr. Korn was not happy when I appeared in front of the Board and by the folks that were keeping my time told me Mr korn cut me off early. It is my belief that it is a conflict for Mr. Korn to be on the board. If you are afraid to step forward bring your proof to me, if you have any.

Ha Ha Ha....
Wheeler at the bottom of the page:
You Mad Bro?

Another lawsuit filed today against Albuquerque by guess who,,,,, The Kennedy Law firm.

I wonder how much Perry is getting when it is settled?

Keep sticking it to them Paul!!!

Has anyone who comments on this blog, and has the proof to back up their statement, tried sending the information to the national level?? CNN, Rachel Maddow, some examples, etc...seems to me that this info. is just swirling around in the state and nothing is happening???

An IPRA request was made by a TV reporter three years ago on all settlement monies paid to the Kennedy brothers and their firms. The City responded and it showed the 2.5 million in payouts for two years. The information was also given to the other 2 stations and the Journal The news assignments editors refused to allow the reports which goes to show you how pathetic our local media are and in the pocket of Berry.

Wishful thinking you dick swallowing putz....go back to the high floors and get on your knees some more....

Watching that video was so funny. Tourek was working so hard to keep his poker face, while looking down his nose at his ipad, acting like he didn't hear anything, and he wasn't butt hurt. He actually looked like a snotty little girl who was being teased by all the others in the classroom. The funny thing is that I bet he wasn't even looking at anything, and if he was he couldn't even remember what it was, because it was all an act.
These guys are a bunch of novices.