Where does this end? Thanks to Schultz, the City paid $862,000.00 total to Sam Costales and his attorney, Darren White $1,100,000.00 potential liability with TruTouch, Bernalillo County $30,000.00 for Sam Costales during White’s watch, and now between the City and County under the watch of Chief Schultz and then Sheriff Darren White an additional $4,000,000.00. Don’t forget the Tera Chavez suit which the City just settled for $230,000.00. These are just a few cases that have been more publicized. When is the public, the Mayor, the City Council and the Bernalillo County Commission going to say, “Enough is enough?”

Both Schultz and White have vicarious liability following them around; why? Who is going to be the next big million dollar winner; Brad Arensfield? The cop who had an alcohol issue that Schultz made public, possibly violating several different rules and HIPAA?

Ironically, the card to the right may be the picture of the "Dragon Slayer hugging the Dragon."

The Honorable Governor Martinez’s new public corruption unit will have plenty of work to do. Clear your wall Governor; it will be covered with trophies in no time.

That is over $6,100,000.00. No wonder the City in a financial catastrophe. The Eye does realize that the County of Bernalillo will be picking up their tab. The problem is the City of Albuquerque now has Schultz and White continuing to cost the public liability. At what point is the Mayor or the City Council going to say enough? How many more millions is it going to cost us tax payers before our elected official do something; anything?

Look at the amount of money being lost and then evaluate the causes. Is there incompetence involved here? You be the judge.

The public is fed up. Our elected official need to act now or come election time; the public is going to act.

Mayor Berry, between White and Schultz, you have been given a pile of nails. Are you saving them for your own political coffin? 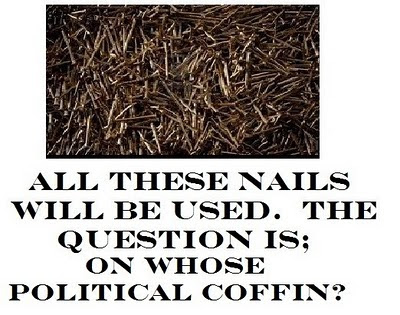 HOW MANY OF APD/AFD DID DARREN TAKE WITH HIM ON HIS "RESCUE MISSION" TO JAPAN?

You are freaking kidding, right?
Did Darren, in fact, really go to Japan to pull off another publicity stunt, like Katrina?
THIS CAN'T BE TRUE.
CAN ANYONE VERIFY THIS? DOES HE HAVE NOTHING BETTER TO DO THAN RUN OFF TO JAPAN TO AID OR ADD TO THE CHAOS?

IF THAT'S TRUE, THEN WHAT DO WE NEED A DIRECTOR OF PUBLIC SAFETY HERE IN ALBUQUERQUE FOR?
I SUGGEST THAT THE STATE DEPARTMENT PAY FOR HE AND TJ'S SALARY, NOT THE TAX PAYERS OF ALBUQUERQUE.

HERE WE GO AGAIN. EVERY TIME THERE'S ANYTHING CATASTROPHIC, BE IT KATRINA, FROZEN PIPES IN TAOS OR ESPANOLA; "HERE I AM TO SAVE THE DAY.....!!!"
JAPAN! SOMEONE WAKE ME UP FROM THIS NIGHTMARE.

Start digging into all the court costs Kathy Levy has incurred because of her incompetence and LIES and you'll really be astounded....

Has the Governor been asked to pitch in on this Japan effort?
If so, is she sending a contingency of emergency rescue people as well? Or is this just an RJ Berry/Darren/TJ mission?
RJ, stay home, you'll just be in the way. Stick to what you do best.; Ribbon cutting.

Did Darren Really go to Japan? If so, for what reason? That country has seen enough catastrophe in the past few days. The last thing they need is Darren White over there to make matters worse. Japan wants to rebuild Darren, not have more destruction!
If he is there, Berry should have kept him here and instead given the money the taxpayers are spending on his trip, to the Japanese government for rebuilding their country.

Excellant article. Schultz can't spin this one away. The facts are the facts. I would like to see a complete listing of city lawsuit money since Schultz was a deputy chief. This guy has cost us millions and yet Berry kept him!!!!

I would ask Berry this, if Schultz worked for your private company, and his actions were costing YOU millions, wouldn't you fire him by now?

Of course when you are spending other peoples money (taxpayers), it is easy to let it go. Berry needs to realize that we, the taxpayers, are calling upon him to let Schultz go and bring some sanity back to APD.

you guys might want to take a look at the other pending civil suits against APD. you will see there are more civils rights that have been violated, more scandals not yet heard about and more millions to be paid.

The public at large loves RJ. Especially his targeting property crime criminals. They have no idea what's going on behind the headlines and spin. It's time to get the truth out to mainstream media outlets.

Hey darren, when you get back why don't you activate ert and help out in Mexico with all the killings.

Pulled over in Albuquerque? These idiot cops will ask you if you have a rocket launcher or a dead body in your car. But not to worry, these questions are just meant to break the ice and lower your fears.
They sound like unfounded accusations to me. I smell another seven figure lawsuit in the works. Where is the city council? Why is FMB turning Albuquerque into the twilight zone?

Re; Post @ 10:27. You speak about ignorant. You spelled "showes,” the correct spelling for it is "shows." Do not speak of ignorance when you're spelling ignorantly. Use spell check moron! You must work for Berry…

The Darren in Japan comment was a joke. Please show a little more common sense. I know you don't like the guy, but you have to be smarter than that or no one will ever believe a single thing you have to say.

Please connect brain to mouth (or fingers) before you start typing.

TJ HAS BEEN ARRESTED FOR LOOTING THE WRECKAGE OF A TACO BELL IN MIYAGI!!!

Any one who has been terminated from city employment need th hire an attorney A.S.A.P.. When you lost your job why wern't you given a different job with the city. Are you a minority. What is good for T.J. is good for everyone. $$$$$$$$$$$$$$$$$. CITY Council we are watching. You have a chief that violated civil rights and a public safety director who lied to you, and is making you all look stupid. I guess your silance speaks volumes.

To Darrens douche squad, the whole comments on Darren "I NEED ATTENTION" going to Japan were a joke "kind of like his heroics" when he went to Katrina. So posting how people "wont take you serious" is kind of funny since you idiots are on this site....

I like the way schultz and white lie bout everything and they ruin cops reputations with their cheap rumors. Bad on command staff for believing everything that schultz says. Wait till you are a victim of schultz flapping his lips full of lies. Good comment levy she is cosing city with her stupidity.

Don't worry about all this money the powers that be have cost. I hear Darren is reconstituting his Highway Men Gang over at BCSO. The plan is to shake down out of towners as they come in at the Sunport for their cash and bling. It'll only take a month or two to raise $6M.
No problemo.

YOU ARE ONE INCREDIBLE PIECE OF CRAP!

The city is broke but now we're buying 1000 acres in Tijeras. WTF.

I sure wish, Berry and Schultz would treat the taxpayer money like it was their money. Maybe then they wouldn't do so many dumb things to lose it!

In the private sector Schultz would have been fired long ago. Definatly after the Costales debacle. Just how does Schultz cost the citizens almost $1,000,000 and still keep his job. Please Mayor Berry explain this to all of us.

If Schultz worked for your wife's company, and he was found to violate other employees civil rights, would you have kept him? Even after it cost you almost $1,000,000? At what point does Schultz cross the line and deserve to be terminated? And why hasn't the Law Enforcement Certification Board reviewed Schultz's certification after the civil rights violation?

City Spends $15,000 on charging stations for electric cars without even knowing what the demand might be? The design looks like it will be easily vandalized, and the city is giving the electricity away? I've got some rechargeable gardening tools and such, where is my charging station with free electricity? Can a city even do that? Give public property away for free? I don't think so....
If they are maintained/operate as poorly as the new parking meter systems do, who is going to take the chance that their $40,000.00 car won't be damaged? When one is, are taxpayers on the hook for that too?
FMB and the rest of the people in charge of the city have no freaking idea what they are doing. Wake up taxpayers and storm FMB's office now, demand he resign....screw petitions.

Darren and the 'old guard' Chieftans are killing the Republican Party.
The tactics used against your own are making the Democrats laugh.
Keep up the good work Darren; keep killing off your loyalists that have done all the heavy lifting.
Maybe the reason this is happening is because the old timers,(dinosaurs of the party) aren't wise to you yet.
Your a 'BUTT BANGER', one that, lets say Allen Weh won't forget.

One (and many others)can only hope that the favor is returned to you in prison.

how stupid is apoa to hire a lobbyist who is producing radio ads attacking the governor and supporting giving driver's licenses to illegal immigrants????? this has to be one of the all-time stupid things to do....

How about this reporter: Firefighters are paid to do a job; they know the hazards walking in and they train to do things as safely as possible. If recognition is necessary then maybe they need to find a different line of work. Last time I looked into it, the number of job seekers far exceeded the number of hires.

Poster @916...300 applicants for the last round of hiring. After agility, written and background check doesn't leave as many qualified applicants as you would think. 23 graduated out of the last class...with 5 alternates brought in. The current class is down to 19. What is more important to you? A sticker on a helmet or public servants falling through a burning floor while saving 8 people from a burning apartment building...don't bother answering, it is obvious what you believe. Maybe if the whole story was out there you wouldn't be so quick to attack. You need your news spoon fed to you.