That would be the headlines if the Mayoral Race was held today based on the signatures submitted; Heh would be the city’s newest Mayor.  Mayoral candidate Paul Heh turned in over 2,000 additional signatures on Monday bringing Heh’s total amount of signatures to a whopping 7,604.  At the bottom of this story is a letter we received from our next Mayor, Paul J. Heh.


In contrast and comparison, Dinelli is estimated to have submitted between 5,000 and 5,500 signatures.   Berry submitted an estimated 6,000 signatures.  Heh lead the three candidates with an overwhelming 7,600 signatures.
One of the oddities we found was both big dollar politicians (Dinelli and Berry) were cleared and given the 3,000 signatures to reach the bench mark several days ago.  The City Clerk has stalled this process for Heh.  The disparity in treatment is obvious.  Heh is the ONLY non-politician in the Mayoral Race.


Now why it is when a candidate submits over 7,600 signatures does the City Clerk drag her feet to complete the process?  Is it because she is incompetent? Is it because she is one of Berry’s hand-picked minions? What is it with Ms. Bail-Berry-Out?
Rather it is incompetence or cronyism, the fact remains that Heh is proving to be a top contender no matter what Berry does to try and suppress or stop Heh.  You won’t see this story on television or in the Journal.  You asked why; it is simple, Berry COMPLETELY controls the local media. 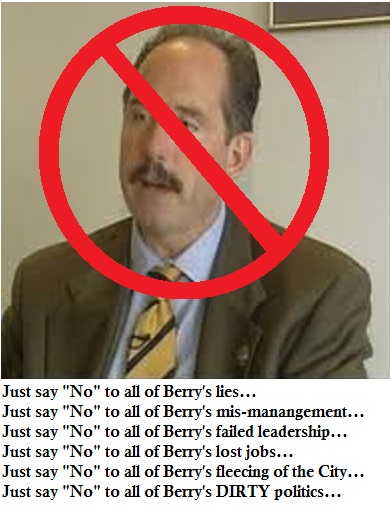 Freeze frame looks like you got froze out. Been to PERA offices lately?

CONGRATULATIONS Pauly !!!!
Now take it to him.
can't wait for the debates. Will Berry show?

Where are the 34's who responded to Berry's home 20 quite a while back on a 52 w/open door only to later be scolded by Berry himself upon his arrival for the audacity that you displayed by doing your jobs and checking the 20?.?.?. You guys were only doing your jobs, fuck him for being so pompous... he's such a POS, was he afraid that you guys might stumble on something defamatory to him???

If post 9:09 is true, where are you apoa? I bet you will back berry this upcoming election.

To the gentleman who organized the effort to get signatures, GREAT JOB! Very appreciative of your efforts as is Paul I'm sure. You know who you are.

APOA is a joke. Bought and paid for by Berry and Perry. Sell-outs.

@1103 and blackmailed into compliance by Schultz. For once can APOA elect someone above reproach (and fire Olivas). That way Schultz can't threaten your livelihood when you go against him because he can still "discover" what he has had all along and fire your ass. You could actually stand up for your members then.

another one bites the dust.... Warfield leaving before he gets Top Three at DC pay.

Although I never worked for Paul, I worked with and around him for years. I will be voting for him, with a clear conscience and a belief that he will do whatever it takes to clean up the mess at APD created by RayRay and Rj. Having said that, however, I do have some reservations about Paul as a city administrator. His career in law enforcement will direct him down the path for change that APD desperately needs, but does he have the knowledge and/or experience needed to run the rest of the city. There is a lot more to being mayor and I can only hope that Paul will surround himself with the right people to help guide him through the rest of the job. Good Luck to Paul, and Thanks to the Eye for continued good work.

Running out the back door like a bunch of spineless cowards. Run motherfuckers, the writ servers will still find your sorry asses because the shit is coming like no tomorrow. They are retiring because they know house is getting cleaned by either the DOJ or the new mayor. One will put them in the unemployment line and the other will put them in the commissary line where they can buy soap on a rope. Yea, they all really care about the future of APD. All these creeps care about now is their own asses and pockets. Their plans and conspiracies have backfired in their dirty faces, and the DOJ still came. Choke on your stolen retirements you scum bags.

Berry will steer clear of Paul Heh because they are terrified of him being on the ballot and the light he will shine on that bald bug Berry. The Berry administration will play like the sissies and cowards they are by trying to take pokes from behind cover and having their henchmen and punks play their bullshit propaganda and games. Every coward act will be exposed and the citizens of Albuquerque will see the true Berry for what he is. Game on!

KARMA COMES IN MANY WAYS. IT SEEMS TO BE COMING TO ALL OF THE APD UPPER COMMAND STAFF. LIKE A FREIGHT TRAIN WITHOUT BRAKES AND A BUSTED THROTTLE. DO DIRT UNTO OTHERS AND IT COMES BACK TO YOU TENFOLD.

Where's Feisty? Hasn't been at his favorite Starbucks and hasn't been seen at 4hilss CC. Why u afraid ya little puke?

He's in his cabin in the phuckin woods.