Recently one of the uber expensive gadgets from APD's RTCC was, well, disabled while deployed on a super secret mission. 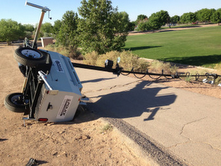 Recently there had been reports of a streaker running around Mariposa park. While we won't be the ones to identify the irony in that, but we thought much was strange about this story. But our eyes are reporting that things get even stranger yet.

Instead of parking the mobile bat-cam drone during a time when the alleged streaker would be out and about, the braintrust leaders at APD parked the $60,000 super spy machine out at night to watch the park during hours where nobody would lawfully be allowed in the park. Now, our guess is RTCC Commander TJ Wilham really wanted to see if there were couples going to the park to...watch stars. Because we know TJ is into watching people watch stars we're left scratching our heads as to what exactly the law enforcement related purpose was. 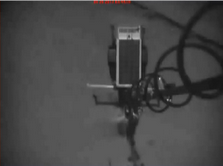 Of course while APD abandoned the machine in the park, much like they did a few years ago with a laptop stuffed in a backpack and a miserably failed tac-plan operation a few years ago, along came some fellows who wanted to take the funny looking drone.

But not surprisingly, they couldn't take the machine and in their efforts to return it to the city, they tipped it over. But this is where things take on a curve scarier than the Blair Witch Project. While the drone was on it's side still recording it caught an image of the nefarious streaker....like that character in Stephen King's story The Lawmower Man, it caught an image of a robust yet disgustingly pink human being completely naked and buried in fresh clippings of grass. But who was this person? Look at the weird image provided by one of our eyes....it looks like none other than..TJ!!!

We can't even make this up folks. A failed police chief allows a failed newspaper reporter to deploy a device worth as much as the average home in Albuquerque to video a suspect committing a petty misdemeanor crime during the time they are not reported to be committing the offense and who does the device capture....but the very reporter!!! We wonder what the other camera's showed? Perhaps the failed Mayor, Mr. Dick Berry and his hockey playing wannabe tough-guy Mr. Perry in a tryst only appropriate for the park they were watching?
Posted by Stealth at 5/31/2013 06:53:00 AM

fuck, all you need to do is follow the trail of empty burrito wrappers and pig feces...

HAHAHA......
WHAT A BUNCH OF DRAMA QUEENS....
Why is it that the attention whores at APD have to constantly interject themselves into world events that don't concern themselves?

9/11, The Aurora shooting, The Boston bombing, and now the Ricin letter attacks. It's like these pathetic little police admin wannabes are hoping for some unfortunate event to happen here. It must suck to have an ego the size of a big city and have to sit on the sidelines like a loser all of the time but that is when you get when you are a bunch of liars who couldn't even run a one cop village police department.
Banks and Schultz should really just keep their mouths shut, and be thankful they have a paycheck until November.

Watch Banks as he talks like it hurts. It actually looks as if it is painful for this clown to put thoughts together into sentences. Look at the strain in his dumb face and the constant licking of his lips like he's fuckin LL Cool J. What a Moron.

TJ - is that Schultzy's ear I see next to you in your little grass fort?

I still want to know how TJ, who hasn't sworn an oath, or anyone else who hasn't has access to the databases utilized and generated at the RTCC.
Sure looks like a class action lawsuit to me.

Wake up and read Monahan's Saturday special release blog. This has Berry Corruption all over it if you will just dig a little.

Monahan has scooped everybody, the Downs at Albuquerque is being investigated by the FBI. Hope Darren, Susanna, Berry, John Garcia, McClesky, Dan Mourning and all their other friends think hard before they start answering questions the FBI is asking. You lie to a Federal Agent and you go to prison. They all better tell the truth.

What is the status of the APOA lawsuit against the city for my unpaid wages due to me from a raise I supposed to get?

Recently, ""The State chose to provide increased wages to those employees not covered by contract who had no contractual rights at the expense of those state employees who had enforceable contractual rights," the order reads." Maybe MOWRER and OLIVAS can quit fucking us over. This is a case we should've won by now and just in time for Berry's rejection by the voters.

Regarding the mess at all City Libraries that The Eye referred to - they're stacking up temps like crazy, they eliminated the basic entry level clerical positions, they make employees sign documents that could make the employee open to criminal charges if they make a mistake, they make employees falsify timesheets reflecting hours not actually paid for or worked. they have city drivers and employees doing labor on the city clock for a non -city entity that makes thousands of dollars a month and does not give the money to the different branches like they're supposed to ....it. goes into the pockets of Dean Smith the Director and his henchwomen. it's a disaster ....similar to Transit .....except library employees are afraid, very afraid to speak out or stand up for themselves.

If someone has knowledge of ongoing crimes but fails to report the crime couldn't they be charged. How is getting a gang fight on tape any different then getting a corrupt person on tape? How many people are failing to give these tapes to investigators?

Why is it people like Dan Kline who were far from experts when employeed by APD are now experts after they have been retired. His oped on this incident was amusing. Tying the damage into reduced manpower and bad leadership, longer response times and citizens not being safe. I'm all for the truth so realize the cameras were not monitered at the time. There was no immediate response because of that. Everything else is bullshit. Some people should stay retired.

Hmmmmmm....
Schultz announces his retirement after Beth Paiz pulls the ripcord and takes off like a bottle rocket. Warfield isn't even deputy for a year and he is pulling the ripcord. I remember him flipping over Paiz getting the DC spot over him, but now he wants to escape. Feist runs away months shy of when he said he was going. Buckner jumps ship without a safety net, gets denied for DOD and now works for wackenhut. Paige is as quiet as a cuckold in a chastity belt.
and the tremendous Banks is giving interviews. You tell me an orca isn't lurking beneath the waters. No more protection and everyone is not so bold. I wonder why the usual suspects have all scattered like cockroaches after the lights got turned on.

I hear when the crew on the 'Bridge' (Yup, that's the 'official' name of the RTCC command center) saw that their probe was being attacked, they called omnipotent Q (TJ) to the Bridge.
Unfortunately by the time he put down his burrito and put on his makeup (fake identity) and reported in, it was too late.

At 5:23....good point...they're fleeing like animals do when they sense a storm or earthquake coming....

"the bridge" that is so Fukien funny. Given we have a PIO that looks like a Romulan, I bet there are pictures of Captain Kirk or Picard on the walls. "The Bridge" ... Get the fuck away from me with that stupid shit!!!