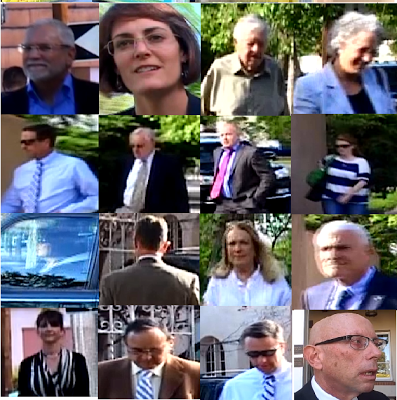 RECOGNIZE ANYONE?
About 10 days ago a high profile fundraiser was held for the incumbent mayor of Albuquerque, RJ Berry. Oddly enough the fundraiser, marked at $500 per attendee, was held at the law office of Paul J. Kennedy, whom many of our readers know has done quite well for himself in suing the City of Albuquerque and in other nefarious affairs. Some concerned citizens forwarded to us the pictures of many of the folks who showed up, and when they couldn't get a picture of their faces because people literally fled inside the offices of 201 12th Street NW, they were able to get their car's plates.

One may ask why is the Eye doing this? The answer faithful reader is in the days since this fundraiser, MUCH has come out about not only about who these people are supporting, but who many of these people may be. As we've seen, the problems plaguing Albuquerque also plague the state. This cabal of Republicans, who in fact know NOTHING of true Republicanism but plenty about fascism, is chin deep in corruption. And it doesn't take a 1st-grader to connect these dots.

A few days ago Governor Martinez's former campaign manager was indicted on federal charges stemming from activities involving the governor's staff. And no sooner had the state's Republican cheerleader and failed DPS secretary, failed county sheriff, and failed public safety director, Darren White say or express words to the effect of "Look this has nothing to do with me and my ignorance in knowing nothing about construction or business operations or the ABQ Downs," did a high ranking Republican fundraiser come forward and confirm that she was interviewed by FBI special agents concerning the ABQ Downs deal and NOT the campaign manager. At issue is whether or not the Martinez administration participated and benefited from what is yet another "pay to play" incident in a state known across the country as one of the most corrupt places in the country. Despite all of the fiscal conservative talk by Martinez and her cronies, if you're a friend of Susana, no expenses will be spared to take care of you. Be it a $100,000+ salary or a lease worth over $1 Billion to Martinez supporters. 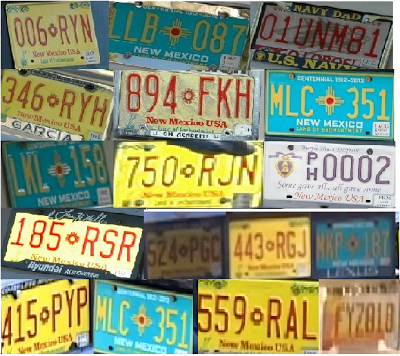 So here, while all this corrupt activity is going on, we have yet another fundraiser involving the same people who supported Martinez, at the law office of Martinez's personal lawyer, and coordinated by the very people that coordinated Martinez's campaign. All this in a city that since RJ Berry took office has seen reverse economic growth, a reduction in services, who are seeing the state's largest police force wither in their very eyes all while a failed police chief continues to say all is good like those violinists who continued to play while the Titanic was sinking.

And oh, where is Martinez? Oh she's in DC at another fundraiser glowing in artificial light cast upon her simply because the IDEA of a Hispanic female office holder is what the RNC thinks will be the next best thing. We say idea because we know it isn't because of anything Martinez has done for she's done simply nothing all while the rest of the country has moved forward.  Does anyone think a huge fund raiser like this should have been held in New Mexico where Albuquerque and/or New Mexico would benefit from it.

So look at these people and the plates. Some of our Eye's recognize these $500 per person attendees because their names come up quite frequently. Or maybe print them up and put them on a dartboard and play beer games.

But know this, when you hear yet another story about Albuquerque on yet another top ten bad list (like last week's annual real estate report....still a buyer's market, still in a recession), remember these are the people that not only donated to RJ Berry and want to keep him as Albuquerque's mayor, but profit from everybody else's misery and hardship.
Posted by Stealth at 6/03/2013 04:39:00 AM

Top row, top left picture is of Steve French. He is a lawyer and brother-in-law of David Tourek. French is also one of three law firms hired by the city to defend the Ellis case.

EYE!!!!!! Rock on!!! Hmmmm, I think this is not only a case of who dunnit, but like that old game from Sesame Street....Which ones don't belong with the others!!!

And the shit is coming out now!!!!
Talk about conflict. Someone should lose their BAR license. Priceless intel on the enemies of the state. I heard Berry got the heads up that "protesters" were on location and he punked out, bitched up, or whatever you want to call it..... and didn't show up. Hahahaha.... Spineless! Distancing himself from his own SOB's (supporters of berry)
These creeps are balless. They would turn their own mothers over to the Nazis to save their own hides. How pathetic.

One of these things is not like the other:

You motherfuckers pushed it way too far and fucked with the wrong people.

I hope the feds take this information and launch pineapples up all their asses.

People like Richardson, Manny Aragon, Vigil-Jiron etc. Made Democrats vote Republican last election. These idiots are going to force Dems back to voting Democrat and leave Berry and Heh to scrap for Repub votes.

former state rep Justine Fox Young is the second from the left on the top row. Thick as thieves with McCleskey

French is also working the Mary Han case. These maggots have no SHAME

Maybe someone snuck Berry in?

Bit of a conflict here. If Steve represents the officers, how can he be friends with the man who started the entire suicide process?

Whose the woman in third roll white shirt?

I know Lisa and she does not take part in fundraisers now was she there.

Funny how with all this shit spilling out, people are leaving APD's fifth floor like it hurts to be promoted. It used to be once promoted to DCOP, people would stay up there until they were forced to leave and/or a new chief came in. Now, Banks is the only hold out, all the others take that third star then pull the ripcord as soon as they are eligible to retire. Hmmmmmmmmm, could it be shit really is coming and nobody wants to be holding the bag when it comes? Real tough guys...biggest bunch of pussies ever to wear a uniform.

Oh. it's coming.
The feds know that this administration conspired to avoid their investigation. That folks, is obstruction. Falsifying police reports to do it is conspiracy and a felony.

Conspiracy charges are the least of their worries. Missing evidence, missing DNA samples, destroyed DNA kits, false timesheets, false grant applications, false supporting documentation of grant expenditures, releasing of firearms without proper backgrounds, missing persons, missing money, missing weapons, missing narcotics, a missing truck, dead persons, violation of multiple parts of the constitution and that is before you deal with the shootings, and the shagging sloshes that run the PD!


The whole albuquerque is corrupt, i worked for a company called First Choice Community Healthcare, talk about corruption. The CEO allowed Linda Lopez to kick off her campaign by using the rooms to have music, food, even though it's supposed to be a no no since the business is federally funded. The tip of the iceburg!!

157 so you agree having city employees working on Berry campaign while on the clock, using city resources, and city email systems is part of that ice berg??? Truly you don't think Berry is the vast majority of that ice berg of corruption?

Oh and will the Journal please stuf. One positive report about job gains in Albuquerque and they post it under every fucking section. Really could you be any more manipulative?

Addressing the first part of your post. Every Mayoral administration especially key appointments within have worked on reelection campaigns. I have yet to see a mediocre mid-level manager/department head receiving executive level pay within city government tell an incumbent Mayor "NO," when they come calling for there leeminings to carry their water. Typically a person won't bite the hand that feeds them.

Secondly, you want the local jobs number to get much better. You want local jobs, you need the unemployment rates to drop. More local people working puts more money back into the local economy. Why? It's all about GROSS RECEIPTS TAXES. This is the sole mechanism for paying your wages. The Mayor, CAO, and city fiscal will have a hard time convincing the courts there is no money to recognize contractual obligations that were negotiated in good-faith. Also, the voting base (in particular Democrats) will not stand for a flourishing economy and an administration who is actively engaging in arbitrary and capricious practices.

If city of Albuquerque employees want Berry out then you MUST organize a turn out the vote initiative. Republicans fear a high voter turnout.

Spring Eyes, what is the point of ur post other than to sound like ur informed? A) no kidding and B) no kidding.

Eye....that is the photo arrays of photo arrays. Biggest bunch of criminal cheerleaders. Except Darren White, Rob Perry, and Tourek need to be in there as well!!! Lmao!

Bottom left, Jada Trujillo, Paul's secretary. I bet Paul doesn't know she is passing herself off as a Lovelace and that she owns that whole block of law offices.

A city the size of Albuquerque should have in the neighborhood of 1,400 police officers to adequately protect the city

You offer no evidence supporting this assertion.

The fact that you start with an unsupported assertion like "1400" pretty much fries your credibility in the rest of what you say.

Re: A city the size of Albuquerque
Since you are obviously one of Berry’s Spin-masters here are the facts since you really did not research your facts completely and correctly:
The greater Metropolitan area has a total of 887,000 people as of 2010. Using your equation (2 officers per 1,000), that is a total of 1,774 officers. A vast majority of those people live in Albuquerque, work in Albuquerque, visit family in Albuquerque, or come to shop or play in Albuquerque. Therefore, a modest number of 1,400 officers would be sufficient to handle Albuquerque’s law enforcement needs.
PS- There is many other sources of information if you wish to frequent those sources; you are free to do so since you are concerned with credibility. People who want to be in the “know” come to the Eye because we give the “Piercing Truth.” If you want or need more factual information please email us at theeyeonalbuquerque@gmail.com. Also, please post your comments under the correct story; apparently you were lost when you posted your gibberish.
Source: http://www.abq.org/Demographics.aspx

And we know 850 is totally insufficient.