On Friday, June 21, city employees, their friends and families gathered in protest of their boss, Mayor Richard Berry. Since his election as the city's mayor in 2009, Berry has been on a consistent and stead track of failure. The city is NOT in a better place than it was 3 1/2 years ago.
There are fewer jobs, job benefits have declined, real estate value has declined, real estate sales have decline, crime has increased, lawsuits against the city have soared, record verdict amounts have been awarded, federal agencies are investigating entire departments, executive personal have been arrested and/or resigned in disgrace, and the list goes on. Has Albuquerque become the Camden, New Jersey of the Southwest?!?!?!
While we may have reasonable differences with our friends at AFSCME, we are in total agreement with them here. Enough is enough! We agree and fully support the hard working employees of the city. From APD officers to clerical staff to laborers to firefighters, they all have born the brunt of Berry's inability to manage, his overt cronyism, his classicism, and his failures. Asserting your dissent is one of the founding principles that make us Americans.
Albuquerque's "Plan" needs to include the removal of Berry and his worst executives. This includes but is by no means limited to Breen and Schultz.
While we're sure, Berry, Perry, Schultz and all of their McCleskey style watchers were out in force taking pictures, so were our Eyes....Yes, we had our Eyes on you. The Eye is pleased with all who expressed their dissatisfaction with this administration and took part at civic plaza and stood together against these few who hide in their lofty offices.  Berry hid and never came out to address the constituents who were present. Our Eyes said it was interesting watching while the crowd of people yelled and waved at Berry's Office; Good Bye!
And Mr. Berry, why do you continue to hide from an honest debate? Are you the mayor or a mouse!? 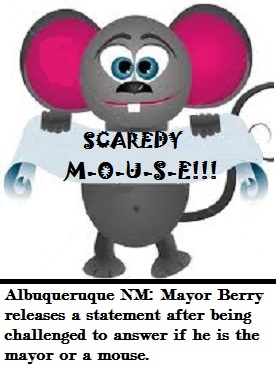 As usually none of the local media (who are obviously bought and paid for by Berry) did not carry this protest. Furthermore, it is very discerning when a politician like Berry controls the media just like Hitler.  Hitler also felt he was an ELITIST and felt he was better than the rest of us. Shame on the media for failing the public. This is extremely frightening and should be of a major concern to the public and the Associated Press.﻿
Posted by Stealth at 6/23/2013 10:18:00 PM

The media didn't scare you when they were in union boy Obama's pocket...did they?

I work at the library and want an accounting on the transparency link on city website detailing how much money Friends of Library brings in for the library and where that money is going. It:s not being given to branch libraries like they say.Is someone getting kickbacks? And why do they use city workers when they are not a city entity? Is library admins. Getting these kickbacks?

Well maybe the AP should be notified.

Thank god I retired in December at least I dont have to subject myself to this mentally challenged administration. I think we were better off with good old Marty at th helm at least he didnt belittle his employees and we got raises....Bye Bye Berry