No we’re not talking about the fires in Jemez or Pecos, New Mexico; we are talking about the huge drug problem here in Albuquerque and how it is impacting the Bernalillo County Metropolitan Detention Center.  Overcrowding has hit a critical level and now the County Commission has authorized a one-time payment of six million dollars to temporarily move the overflow to other facilities according to Channel 7 News (READ IT HERE).


Until Mayor Berry of Albuquerque takes responsibility for our city and the pandemic problems we have here, things will continue to deteriorate.  Berry wants to boot the car of a ‘John,’ Berry started another “plan” to deal with property crime, Berry this and Berry that… It is sickening to hear all the political garbage from Mayor Berry.  Here is an idea: take ownership of the problems; be responsible and accountable.  This will allow a process to take place and fix the underlying cause of the overcrowding at the jail.
The underlying problem is drugs like heroin, oxycontin and meth.  We need to find an answer to these problems.  Drug users do not have the money to purchase the drugs so they turn to a life of crime.  They steal cars, commit burglaries, commit larcenies, commit fraud and identity theft, etc...  Bottom-line; they all eventually end up in the Bernalillo County Metropolitan Detention Center.  The end result is overcrowding.
Berry has done nothing to correct this problem or to even start to address it.  We need a new mayor with an understanding of what is ailing our city and has a plan to correct the problems.
The only mayoral candidate who has a plan to address this issue is Paul Heh.  One of the main prongs to Heh’s campaign is to start a drug rehabilitation center where non-violent criminals who are addicted to drugs can receive real treatment which may take up to a year.  Heh understands that “locking em’ up” is not the solution but part of the problem.   Heh’s plan includes an education and skills/trades component where the person will also receive a minimum of a G.E.D. and when they are released they will have the skills/trades to support themselves without returning to a life of crime.  If you would like to read more on it click (HERE).
This problem IS NOT going away.  It will only get worse with time and the County will be spending ten times this amount in the future.  The drug inferno will only rage on and continue out of control until we elect competent leaders.  Why hasn’t this mayor worked collaboratively with the County to solve the underlying problem? We all know the answer…Four more years of Berry will prove to be devastating to all of us.
The six million dollars the County is spending now is wasted. That same money could have been more wisely spent on solving the problem not treating the symptoms of the problem.
There is a saying, “If you’re not part of the solution it means your part of the problem.”  Berry Bueller; Berry Bueller; Anyone? Anyone?
We need to turn our city around. 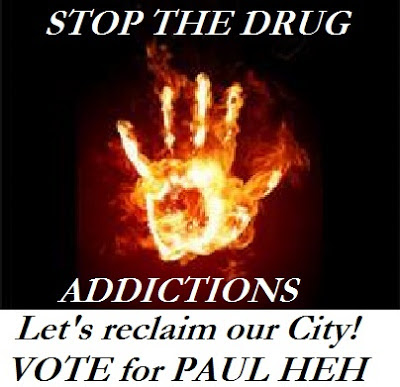 Very thoughful as to the realitites of the 'drug war'.

What it is, and what it is not.

What a great program. This is being done in other states so why not more in New Mexico? Better to turn people away from drugs and into a productive life than to send to prison where they learn more about crime?

Drug addiction is behind all crime on the street level. From theft of all kinds to prostitution...drugs, drugs, drugs. Gotta cut off the head of the dragon....does this Mayor have the cohones to do this?

Do a Google search on what the Mayor or Chief of Police have had to say about the drug problem in ABQ.
Nothing but lip service....footnotes.
Seems they have been too busy doing CYA's and self-promoting, while spending piles of OPM.

It's as if Shultz and Berry are being paid to look the other way.

The only ones that can solve the drug problem are the drug addicts.. It doesn't matter if there is a place for them to go and stay ON OUR DIME... Drug addicts are all the same... Give them a place to crash for awhile and then they are right back out there stealing and selling and using.... The problem will never be fixed no matter how much money is promised..... It's just a shell game and they know it.

The drug war wil be won when kids stop trying everything they can get their hands on. If it is cost prohibitive due to limited supply or if kids really understood what this crap does to their lives then they would stay clean.
As long as mom and dad "just smoke a little weed" or say crap like oh your knee really hurts go get one of my pain pills or doctors give out these pills like candy we are going to keep turning out addicts
Last year enough prescription opioid pain killer prescriptions were filled in the US to keep the entire adult population of the last Census drugged for three months,

Basic economics. Supply and demand. Whether its drugs or prostitution. Eliminate the demand, you eliminate the supply.

8:41 PM:
Spoken by a very sheltered and ignorant person. Guess you've never been around drugs much. In the real world, REAL people get hooked. Doctors, lawyers, teachers, soldiers etc. Anyone's child could get hooked too, even yours. Get out of perfect 'Ville and join the rest of us out here fighting the fight.

@ 10:51 AM Guess being a member of law enforcement for over 25 years and personally having to transport the addicts to hospitals or jails where they just clog up the system and waste time with their BS doesn't qualify me to have an opinion... You sir/maam are an ass clown.....

10:51..very true. Does the other poster not realize that these addicts were not sloppy, lazy, unemployed, jobless,homeless, helpless until drugs took over their world? its not just the lazy junkie on the streets. it's the Rush. limbaugh 's and other upper middle class and the very rich that have serious addictions as well ....some legitimate doctors in Albuquerque are just pumping their fully insured patients with opiates and speed given by prescription tor Adderall, Ritilan, oxycodone, tylenol 4,codeine, you freaking name it! You don't hear much about these folks ....they aren't standing at intersections begging from us (yet) !

my son is an example of the making of a good kid into an addict. graduated high school, got accepted at UNM and had a job at Walmart. the studying, working almost full time and carrying a full course schedule took it's toll.a "friend" said he could get him something to keep him alert and up all the time for school and work. fast forward 13 yrs. later and he sits in prison for a second felony. in & out of jail for 12 years ..family life destroyed, Meth. Poison ....a life ruined for a once middle class intelligent young man. it can happen to anyone. Who is controlling this mayor telling him to not make drugs a priority!? is he in cahoots with the cartel!?

I don't even like taking aspirin. But after the recent news, I think it might be in my best interest to go down to APD HQ and FBI HQ with a pictures of myself for them to keep. I want to make sure they know I"M NOT A DRUG DEALER AND I'M SURE AS HELL NOT THE DRUG DEALER THAT JUST RIPPED YOU OFF!!!!

I sure hope that young man has gotten himself 24/7/365 US Marshall protection.

At 340....with you being a taxi driver for 25 years indeed qualifies you to say taking addicts to jail or hospital will solve nothing because you're correct. But drug court here has proven to be a successful program to get people clean because it's built on treatment, not punishment. And when you sling labels you loook like an idiot and dishonor your 25 years in LE.

Wow, Schultz fired Rice but keeps Surran and Solis. Help me figure how that fuck'n works?!?!?!

Ok so what's your solution to the problem?? I commend you for putting in 25 year's in Law Enforcement but this is the job we chose. Do you have any ideas that are your own or do you just prefer being an elitist, think's he/she is special, mental midget?

What a bunch of bleeding heart librals.. Take your Subaru's with all the Obama/Biden bumper stickers and get out of town..

3:40,
You don't speak for me. And as one who spent over 20 years on the street we all know you can easily hide for 25 years. That means nothing to me. Seen many a 25 year clerk typist with a badge and gun.

Wow Councilor Harris, what will your study cost? lets save the taxpayer money. No one wants to work here because we are under DoJ investigation. Last time you ordered this study in 2007 we were under the crime lab scandal. You got rid of that Chief numbers went up. This time we are under DoJ, you want numbers up loose the corrupt fifth floor.
Don't believe us get that stupid apdtv. Chief says sixty some percent of public support us. Thanks chief for confirming more than three of ten citizens don't support me. I suspected it but now you confirmed it is worse then I thought.

ALWAYS FOLLOW THE MONEY !
What did APD do with the $741,000 that was given to them by City Council on Nov. %? It was supposed to be for "investigating drug crime"? in 2010 the Feds gave NM 11 million to be directed toward drug/gang crime-how much has the crime rate dropped since then? The US Marshalls created a position just to address asset forfeiture here two years ago-how much $ is acquired for local and Feds (they get 20%) from stopping/confiscating $ from drug dealers?? The more dealers/business-the more $. So, is it more profitable to have lots of drug business? What percent of NM economy is drug generated ? ALWAYS FOLLOW THE MONEY !

IT'S ALL BECAUSE OF RAY SCHULTZ. FIRE HIM AND THEY WILL COME.

@ 8:35 you took it upon yourself to assume the poster of the 25 years in LE comment hid??? How can one transport addicts and hide at the same time... BITE ME....

1:21,
Easy asshole, By staying logged out transporting people like you for a few months in the foothills, then going inside. If you want to meet up to see what a real cop is just drop me a line. Bite what? You nutless sack.

The other 600 are up his soft flabby bitch ass.

At 1 41 spoken as if you have loads of experience doing the same. I bet your sure a Sgt or Lt now. Ass clown...

at 4:10, no because I pick up the calls those fuckers avoid. You are the ass clown, douchebag.