And to the Rich goes the Spoils

The City of Albuquerque’s CAO, Robert Perry, has ordered a pay increase for all of the mayor’s cronies.  This comes as the City has reneged on union contracts for the past four years.


The backbone of the city is the blue collar workers and yet the Berry Administration gives a pay increase to the top level loyalists of Berry.  Perry ordered all non-bargaining (non-union) units in the City to receive a 1% pay increase.
This may not seem like a lot but if you are Ray Schultz who makes in the neighborhood of $142,000.00 per year; this amounts to a pay increase of $1,420.00 per year.  This does not include Schultz’s sick, vacation, and sell-back time. Schultz has been here for eight years (eight years too long). Schultz’s vacation hours will total around 1,280 hours and his sick leave hours will total around 768 hours.  This is a grand total of 2,048 hours. Based on Schultz’s converted hourly rate of $68.26; this will bring his cash-out to a grand total of approximately $140,000.00. Now we need to add Schultz’s 1% pay increase; his cash-out just went up $1,400.00. This just adds insult to injury. So for the bleeding heart who thinks Schultz is being treated badly for ruining a once great police agency; know this, he will be greatly rewarded for his corrupt acts with a huge sell-back and pension that is absolutely shocking to the regular citizens of Albuquerque.
SIDEBAR
We wonder how much Schultz’s “consulting” Contract is worth.  $55,000.00ish?  Not bad; ruin a great police department and still receiving all of these bonuses…
ENDSIDE BAR
But, this is all consistent with Berry’s way of doing business. Berry ALWAYS takes care of his supporters. Let’s see here; screw the little guy and give the money to the big dawgs who do not need it… And to the rich goes the spoils of a corrupt mayor.  Even if you are a support of Berry; don’t you see a problem here? The pattern of corruption is repetitive.
An interesting and ironic twist to this is several unions in the metro area have endorsed Peter Dinelli for mayor when Dinelli has lauded himself over and over as a white collar manager for over 27 years in and outside of city services. Hopefully the membership of the unions are tired of getting screwed by white collar and hopefully they will make a responsible choice when they vote. 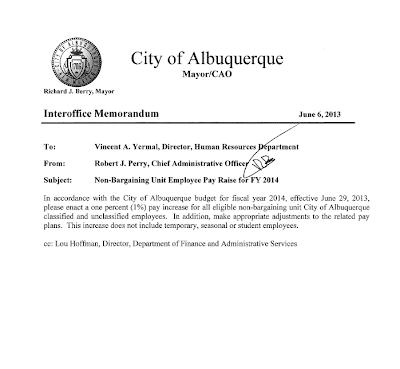 The citizens need to demand an audit of Ray Schultz vacation and sick time. It looks like he never took off any time! In eight years he only burned about 600 hours. That is less than 2 weeks per year. Do any of us really believe he only took 2 weeks off per year? We were fools who voted for Berry 4 years ago, but we are not fools now. The city council must demand an audit and an explanation of how Ray could work so much and take so little time off.

What they will discover is Schultz was gone, but he will say he had his cell phone so he was still working. This is BS and he should be called on the carpet for stealing from the city if he attempts to take this large sum of money.

Not only have I never gotten the 1%, but did anyone look at their paystub? Health insurance thru the City is over $100 more than what Pres would sell to us as independent direct buyers and every copay for a doctors visit went up too.
If my kid has an asthma attack one doc visit and two prescriptions will cost me $155 with the City insurance. I don't even bring home $75 a day!!!

Fucking criminal scum bags. I hope it was worth all the treachery you douche bag schultz. And perry, you fat crooked cocky little troll cunt. You pussies wouldn't know what to do in a city where you couldn't hide your greedy thieving coward asses behind layers of people laws and locked fucking doors. Cancer, hiv, and massive heart attacks are too good for you wastes of living oxygen thieves. One can only hope karma, by the way of an affliction so fucking evil, latches onto your rotten asses and doesn't let go of you until it sucks back everything you stole from the lives of everyone you have fucked over, making you want to give every dime back rather than take another worthless breath or see another day of fucking sunshine.

Seeing you motherfuckers in the pruvate sector, after the election, hiding like cowards from exposure is going to be a priceless godsend.

I believe Schultz did a pay out already, years ago. I don't remember the specifics but I believe the Journal did an article on it. Maybe someone can google it. I don't recall exactly what it was but I believe it had something to do with vacation/sick.

TO ALL CITIZENS OF ALBUQUERQUE -

WE NEED TO PUT A END TO ALL OF THE CORRUPTION AND BULLSHIT THAT'S HAPPENING HERE IN ABQ.

WE NOW HAVE THE OPPORTUNITY TO TAKE OUR CITY BACK AND TO TURN IT AROUND. MAKE THE CITY OF ABQ A GREAT PLACE TO WORK AND TO LIVE.

RICHARD BERRY MUST BE VOTED OUT OF OFFICE.

LOOK AT WHAT A MESS THE CITY HAS BECOME IN THE LAST FOUR YEARS. IF RICHARD BERRY IS NOT VOTED OUT OF OFFICE CAN YOU IMAGINE WHAT OUR CITY WILL BE LIKE WITHIN THE NEXT FOUR YEARS?

HEAVEN FORBID THAT YOUR FATHER, MOTHER, CHILD, SIBILING, HUSBAND, WIFE, PARTNER OR FRIEND IS TAKEN ADVANTAGE OF OR WORSE YET KILLED JUST FOR THE SIMPLE FACT THAT THEY HAVE TO COVER UP THEIR TRACKS AND/OR THEY WERE IN THE WRONG PLACE AT THE WRONG TIME.

GET OUT AND VOTE. OUR VOICES NEED TO BE HEARD.

How much did Schultz take from the taxpayers in 2004, when he retired and cashout?

6 figures! Wow this guy just never takes a day off from work.

Or he is never made to put in for taking days off from work.

I think the truth is the second, he just never put in a vacation slip and Berry never made him.

Need's to be put out in the media.

"put out in the media"? We should be so lucky. The media here suck. They are more interested in "investigating" penny-ante stuff than offending the bigboys--biting the hands that feed them.

Looks like Albuquerque is following the path of Detroit.

The media is more interested in the many faces of Levi, the media loves a cop gone bad story. Since most people hate cops thats always gonna be the lead story.

Oh they will throw a story bout cops chasing after bears but then show the bear in a foot chase a mile ahead to further make fun.

No one cares about Berry's shenanigans, they only care that their trash is picked up weekly and they have water when they turn the knob. Nobody cares who the leader is at the time.

Its always a popularity contest and this year unfortunately once again Berry has the momentum.

Sheeple...entitled..could care less for the broken hearts and souls of APD officers who see the unspeakable and unthinkable day in day out..no wingtips. .no satin ties..just a blue brotherhood of hard working cops..the suits are envious and hateful to the men and women who are smarter,more clever and physically superior to the likes of bloated,swollen Perry Berry Schultz and stupid Banks. Rot in hell all of you.

Sign our union contracts and get your pay raise whiny bitches

The M series got a new contract....what about blue collar,clerical and transit..Nada..zero..zip..
Dont expect ANY city employees to vote for you Berry, or their families,or their hundreds of cousins, aunties, etc.etc. We all hate you.