The open letter (political sarcasm) below is from Sgt. (Ret.) Daniel Klein.  Our Eyes tell us Klein was one of APD's better sergeant's back in the day.  Kleins letter hits it where it hurt because it is the truth.  You see folks, it is not the "Evil Eye" who is doing this to Berry and Schultz; they have done this to themselves. Yet, these cowards never stand up and take responsibility for their part in this pathetic mess that they have created. 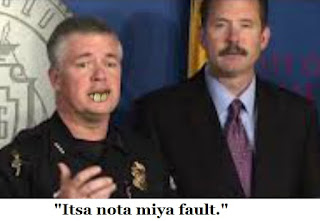 Please read on and enjoy!
The Eye
After reading Mayor Berry's and the Albuquerque Journal Editorial response to the Department of Justice investigation (December 1 and 2), I thought I could simplify what they are trying to tell the citizens of Albuquerque. Since it appears the Journal Editorial Board and the Mayor are the same person, one reply will suffice. This is written as political sarcasm.
Dear Albuquerque Citizens,
After years of not holding accountable the Albuquerque Police Chief for losing over $30,000,000 of your hard earned dollars; and after spending months trying to keep the Department of Justice out of our town, guess what? The DOJ is coming to town, just like Santa! And just like Santa they will bring presents to the good boys and girls of Albuquerque! What are these presents? High paying federal jobs!
Let me take this opportunity to spin the DOJ investigation and try to make you believe that this is what I wanted all along. Just forget about my veto of the city council resolution, the democrats on the council are out to get me. Believe me when I tell you this investigation will be really good for Albuquerque. Think of the opportunities Albuquerque will have now that we are nationally recognized by the federal government. When Albuquerque lost the last DOJ investigation to New Orleans, we were disappointed. Chief Schultz and I considered this a challenge, as we knew we could convince the DOJ to relocate to Albuquerque, and we have been successful!
Since I have been mayor, Albuquerque has been faced with many challenges. These were brought on by Marty Chavez and Barack Obama. I blame them and you should to. Chief Schultz was only the person in charge of hiring at APD, I certainly do not hold him accountable for making dubious hires. Why heck, I never hold Chief Schultz accountable. It was Marty Chavez who provided the budget to hire more officers and by doing so it made Chief Schultz hire some bad ones. Chief Schultz was just not ready to take on growing APD, it's not his fault, he was in over his head. So even though it was Chief Schultz responsibility to hire good officers, I hope you will join with me and still blame Marty Chavez, that makes my life easier. As a citizen don't you want to make my life easier?
As your mayor I embrace the arrival of the Department of Justice as they will bring many high paying jobs to Albuquerque. After three years of losing large employers; I can now proudly tell the citizens of Albuquerque we have been successful at bringing in one of the largest employers in the federal government, The Department of Justice. Chief Schultz and I are now trying to convince the DOJ to relocate their headquarters to Albuquerque. To help facilitate this move I am asking the city council to provide tax incentives for the DOJ. I am willing to provide the DOJ free city offices at the police department. Since we are over 100 officers below APD authorized strength we have many vacant offices in the APD building!
Fellow citizens do not look at the DOJ coming to town as a failure of my administration. My plan all along has been to get a large employer to come to Albuquerque. I would like to thank Chief Schultz for helping to make this possible. He has worked night and day since 2005 to make sure this large employer, the DOJ, has reason to set up offices in Albuquerque. Chief Schultz has brought the DOJ here and I would like to join the community in thanking him for bringing good jobs back to Albuquerque and putting us on the map.
Merry Christmas fellow citizens and remember, even though I screwed up the Paseo rebuild (I really thought Albuquerque the Plan was a good idea), costing you even more money, the gridlock will begin in 2013!
Good for you, Albuquerque! And don't forget lumps of coal for Marty Chavez as it is all his fault.
Mayor Berry and the Journal Editorial Board
(Not really, they didn't write this)

I guess now we know why JetBlue opened up a redeye flight to the east coast....so all of Berry's scoundrel friends can sneak off in the middle of the night!

Berry cant blame Chavez for his blunders as much as Obama can blame Bush. Its time to own it Mr. Berry.

Anybody know why folks from UNM are looking at yanking Feist's masters degree for plagiarism and violations of code of conduct???

Very true. For years they thought the 5 th floor was bugged but it turned out that they can't keep their own mouths shut. More gossip starts from there than anywhere else.

Just remember, Schultz said this DOJ 27 is a "personal challenge." When Schultz quits and walks away, don't buy into that "he's doing it for us" horseshit.

I hear the idiots are blowing gaskets over the shit coming out here. And this is just the tip of the iceberg. I have a feeling these dullards have absolutely no clue at all what they are in store for and their bubble gum mob lawyer isn't enough to hide behind. One DC is running. When one falls they are going to go like dominoes, and that means all of them. I hope they like their Christmas present. One can only hope that the DOJ puts these malfeasants in prison. I'll bet every one of them is on a steady diet of pepto bismol and tums. Drink lotsa water liars, we wouldn't want ya getting kidney stones.

I have had kidney stones. Kidny stones would be too good for these bastards


Best Post of the YEAR. Couldnt of said it better myself. The sad thing is I used to work with Ray in the FSB back in the day and he is a fallen person. Its time to leave Ray. last 8 years as Chief and almsot 30 years is a good enough career. Time to go buddy

If I were a deputy city attorney named Kathy Levy, I'd be a little more careful about putting so many down and then driving away at a law office Christmas party....

I would have to have a BAC of .25 just to sit in teh same room with that thing!

You get teeth like that from sucking ass your whole life.

And speaking of ass....
Berry speaks out of his.