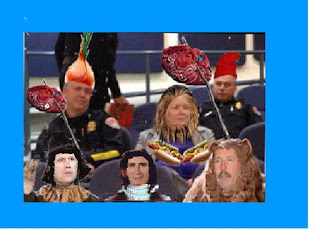 This famed cast is from the City of Albuquerque and are the newest comics.  This picture is "Eye humor" it shows how the hypocrites go around acting like they've done nothing wrong and all is good in their land of make believe. Everyone else sees these clowns the way they really appear to the rest of us.
Perhaps the DOJ will give the City's cowardly lion the incentive and courage to start firing some incompetent people and hold others accountable...After all, he has only been in office for the past THREE YEARS collecting a check from the tax payers.
If you're into sports this is the way the score card looks:
BAD DECISIONS                  100
ACCOMPLISHMENTS             0
This isn't Kansas Berry; wake up and do something.  You have already embarrassed us here at home and now your going to embarrass us on a national level with the Federal Department of Justice.  You are as worthless as a white-out when a person is working on a computer.
Do something; anything, or get out of the way and let a real leader step in and handle this mess that you and Schultz have created. 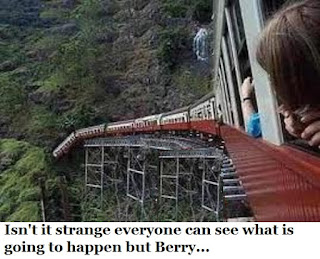 Perfect: No brain Levy. No guts Berry, no nothing Perry, no nothing TJ, and onionhead Schultz. Perfect. Except we are in Oz an the munchkins are in power messing things up.

Hey did ya'll get the blanket email inviting us all to the retirement gathering for Feist?? The only ones that will show are the A** kissers looking for a promotion.... Hope they didn't get too many "refreshments" they need to give the lefts overs to the homeless downtown...

You know, It would be funny if it weren't so damn criminal with these scum bags. I hope they go to prison

Holy crap.......... Joe Monahan says that Berry is considering running for Udall's spot.. God help NM if he gets it. He would have all of his cronies with him tagging along messing things up on a state level instead of just a city and collecting a big ass paycheck for doing NOTHING... I see NOTHING...... Would be right behind him too......

Let Berry run aongside Weh for Udall's seat. They will both get their asses handed to them. And Allen, goddamnit sir, I'm very disappointed in you for cohorting with these fools. Very unsat. Berry, your are the biggest guffaw loser I've ever met.

If you look on Wikipedia for Buffoon you'll see R.J.Berry, Mayor of Albuquerque ....seriously people with a whole lot of power and influence but lacking in social skills,intelligence and empathy.are dangerous. That man, without a clue, will be the reason this City will crumble and all the sloths around him are going too. IMO he's a sociopath.

Monahan's blog today is great. As usual tho Eye is about 3 months ahead of everybody else.

Even with a looming DOJ investigation, the head imbecil in charge tries to circle the wagons and tamper with evidence and witnesses. You won't learn till you are in prison, will ya Ray? You can beg everyone you want to stick together, but the fact is birds of a feather flock together. You and your followers are all a bunch of spineless cowards, so when one crumbles, the rest will follow suit. It's nice to see you squirm under the same scrutiny that
you have forced on others. It's your turn now sissy. So much for transparency? EVERYTHING YOU HAVE TO HIDE IS GOING TO COME OUT. The DOJ doesn't come in unless they already have something. This administration has done way too much to too many to think that a whole lot of people aren't giving up the tapes. Reality check, everything is out there already. It's too late pal.

YEA...Monahan drove it home today. Way to go Joe! This chief is just blowing smoke up people's asses including the DOJ. ME thinks the DOJ isn't going to have it though.

Contrary to what the 5th floor would have everyone believe, it is the opposite. The 5th floor is scared shitless, has no transparency, and is circling the wagons. The officers are happy the DOJ is here and relieving them of a tyrant who sets up malicious investigations against officers, lies on them, tampers with witneses, and hides evidence. The officers will cooperate fully, and the officers know where the problem lies. The officers aren't running around trying to do damage control while hiding behind a fat haggard boobiedoo city attorney who lies. I think everyone is over the fairy tales and lies. The community will be a better place once these rotten apples are gone.
Schultz, Feist, Banks and LEvy are a stain on the badges of good hard working officers.

The chief and his lapel cameras policy. Great job Monahan pointed that out. Schultz is only putting forth paper policies trying to get the DOJ off his butt. Glad to see the folks at Monahan's blog see through this.

And why wasn't Schultz and Banks disciplined for not wearing, or using, their lapel cameras? Mayor Berry they answer to you, could you pull your head out of the sand long enough to answer?

Berry doesn't know how to think, he doesn't have a brain.

You wouldn't have wanted them to crash on their Segways without helmets, would you?

They leave hits for AT LEAST six months if not forver!!!

He tries to think, but everyone else is ten steps ahead of him because his nerve synapses have to bounce off Ray's fat ass, then off perry's empty nut sack before registering in his hollow head.

APD frames their own officers, why would they care about procesing evidence to exonerate someone.

And as far as feist's party, I wouldn't soil my lungs by breathing the same air as that filthy coward liar.

Hey instead of pitching in to help buy Feist his gun lets see if we can order up a SPINE..... Pennies for the homeless?????

Bakas wants to be DC!!! Time for a real leader!! Scott Lopez for Commander after!!! ;0)

They don't make spines tiny enough for smurfs. He'll have to be satisfied with slithering around on the floor like an amoeba for now. Must suck being at the BOTTOM of the food chain. Little pussy.

Wasn't there a huge mishap in the evidence freezer a little while back where a shit ton of DNA evidence that was just sitting in the cooler forever was rendered worthless before it could be processed. Can anyone shed light on this?

Funny thing about evidence "mishaps"...they usually lead to arrests and jail time. Look at that chick from the Mass State Crime Lab. Hmmmmmmm, me thinks given Feists and Adams's propensity to lie and destroy evidence (seen any 23 videos lately Mark?), release evidence, and make things disappear, one wonder how bad things are on the inside....

I really hope the DOJ looks into that missing sex surveillance video tape from the evidence storage warehouse. If someone wiped that from the hard drive, they need to be prosecuted for destroying evidence.

What about the stolen pills from Evidence and the ammo taken??? That was on tape too. Is that missing???