The following was forwarded by one of our Eyes:
"Eye, thank you for your recent publication of the press release by Paul Heh. Now i understand what I saw a few weeks ago.  Attached is a picture that I took at the end of August when I saw Ray Schultz get into a shouting match with who I think was one of Paul Heh's campaign workers. Now it all makes sense.
I was leaving summerfest on the westside when I saw who I thought was Ray Schultz. He was with a woman who seemed to be in her late 30's or early 40's. Black hair, maybe some hilites and a child who was maybe about 8 years old. I saw them get in the car that was definately an unmarked APD car. As it pulled out it suddenly stopped and I saw Schultz get out of the car and start yelling at somebody. He was saying "What, you wanna picture? Why do you want a picture?" really loudly almost yelling at a petite woman who was holding Paul Heh campaign signs and walking towards her. Then I heard somebody yell "because we like you Ray" and I looked over and it was Paul Heh.  Schultz turned red in face and turned around got in his car and drove off. I was able to take this one picture as he was driving away and you can see the orange cone he is about to run over and actually does.

Anyways, since there had been all this press about Schulrz retiring, I couldn't understand why he was still in a police car. But after reading Paul Heh's press release it makes sense. He really hasn't left. Feel free to post this email but please don't reveal my email address, I don't want Schultz or Berry's people coming after me. But I think this should get out and people should know that Schultz is definately still around." 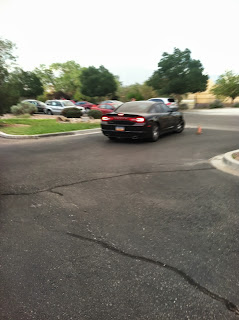 A child about 8? Fischer's kids are older than that. Could it be another woman? Who is this mystery third woman, oops fourth woman, oops fifth, oops crap I've lost count of all the not Ms Schultz's over the years.
But hey it's just nature at play and none of our business right.

Schultz is a parasite that just can't stop feeding off the host body/taxpayers.

How many people on leave until retirement are allowed to have a company car? I believe that APD has a policy of duty use only for city vehicles. Why is this scum bag allowed to drive around in a city car, using city gas, when he is burning his time for 4 months? This is out of control. This pathetic freeloader is so hard up that he can't buy his own car and pay for his own gas? And this asshole is making $10,000 a month?
This is fucking bullshit. If Berry wants to be Schultz's sugar daddy he should do it on his own dime.
You work 30 plus years and can't afford to support yourself? What a pathetic excuse for a man. More like a cheap greedy little sissy. He probably took his date to burger king that night.
It will be a sight to behold when karma catches up with this louse.

The people running this city are the biggest bunch of lowlife despicable hypocrite creeps and liars existing. They are totally at the bottom of the barrel when it comes to humans. I wouldn't feed them to hogs or pour them over plants. They belong in a septic tank with turds, soiled toilet paper, tampons, used condoms, cigarette butts lungers and a half eaten cheeseburger from jack in the box.

Here's a question, find out if Schultz's paperwork shows he turned his car in or not. There's a department property inventory form let's see what the date is on that form and see how it lines up with the Summerfest date.....

So Willowby, how's your boy Olivas now. Riding with Schultz? Here's a question for you since your all for going up for Conner Rice, are you gonna step up for Rob Woolever and John Doyle? You remember those two right? They were the one's fired for catching a wanted murderer, were given commendations but then thrown under the bus. Tell us what you're gonna do there with them?

I work out at Pino and Schultz has been seen in a unmarked unit.

The media in this town will not investigate anything with Schultz because they are bought and paid for by Susanna and Berry. The media here forgot about the 1st amendment a long time ago. They are only looking at who will grease their pocket books. Doug, Tom and Dick we the public have lost all faith in you. How does that feel? Do you care

The polls are saying are only as good as the sample pool the data is drawn from. I guarantee the standard deviation value is off the fucking grid which means the poll has very little legitimacy.

But, if there has ever been a time where people need to take to the streets and say ENOUGH, this is the time. The city is being run like an outpost rather than a tier I city. If folks are gonna shrug and be like that's ok, than know that you are a true pussy.

And Schultz, yeah I saw you at California Pizza Kitchen....and even better, I know you know I saw you. Bring it motherfucker.

The other story shows the paperwork which listed Shultz "early" retirement starting Sept 7. So if this picture was taken in late August that explains it. Where the water gets muddy is the "consulting" contract he was awarded. When did that start? If his seperation date was the 7th of this month he is still under his contract...right? Do contractors get city vehicles? Can contracts be awarded to a city employee? Can you get paid fir a contract on top of earned leave? Where is the transparency with this? I just confused myself trying to follow the money.

It was Karen Fisher. Others saw them together. Schultz had his baseball cap pulled down but i know it was him and Karen.

Ok, but the city 's ethics ordinance prohibits employees from contracting with the city until after at least a year. I know I know I know...ethics is the last thing these people care about but it's a fact. another fact!!

It is great to see that at least some people realize the Susana/Berry/Schultz/Media axis.
Especially atrocious are KRQE (Knipfing)and the Journal. All are bought out by the big bucks involved.
Does anyone suspect that Schultz has "pictures" of Berry? Anything on Berry?

Lieutenant, the polls reported that the confidence levels were at the 95% level, which is at the second standard deviation. Most surveys are at that level.
I don't like the poll results any more than you do, but I'll bet they are close to the mark.
It will take some major incident in the next several days to change the results much.

The real issue is that the City does not allow officers to drive their vehicles for personal use, and definitely not allowed to have passengers, unless they are headed to jail.

So why is Schultz (not even an officer (retired)) allowed to drive a city vehicle for personal use and have non authorized passengers????

Can Berry, Banks or someone please answer this question!?

Schultz, had that Charger repainted @ a cost of over 6000.00. He had to have a metal flake. Public information will show the cost of the paint job back in February. Repainted a brand new car on our dime! That is total FUCKEN BULLSHIT! Randy Chavez was driving it all over showing it off.

I heard a police report was filed against Schultz for being disorderly and running over a traffic barrier. Too bad Heh didn't knock the shit out of Ray!

Berry will win. Denelli (more qualified than Heh) should have run with Heh's support and a promise that Heh would be the Chief and clean house of all those ass kissers on the 5th floor. To Late, To Bad, To Sad.

Be sure to vote. Have your family and friends vote. VOTE OUT BERRY!

If you don't vote, you will get what you deserve. If you work for the city that means 4 more years of no raises and even fewer officers.

GET OUT AND VOTE! Stop complaining and VOTE. HAVE EVERYONE YOU KNOW VOTE FOR ANYONE BUT BERRY!

Ya know this all is disgusting. If a 34 pulled this shit They'd be facing fucken charges like Rice did. Btw, a big fuck you Ron Surran.

Saw dingleberry recently with mistress. You know, the one missing her panties.

Someone needs to do an IPRA documents request. Anyone have Ray Rays unit and tag numbers??

3:58, 7:18,
Little lady, your political strategist fu is all fucked up. Go back to basics. As it is, Berry is tits up come October 8th.
Polarization will be his demise and what happens if there is a runoff will insure his loss. Just watch. Never trust your process. Pysops are in full effect. You look sexy in pearls by the way.
Huggs and kisses!
The Big R

All of you have taken your EYE off the ball....it's time to stop the mamby-pamby whining about shit you cannot do anything about and FOCUS on getting a viable, electable candidate to get elected as Mayor of this crumbling, rotting carcass f/k/a ALBUQUERQUE....and send Berry 's ugly, shiny,sweaty bald dome into fucking oblivion where he can rot for eternity...God it's so obvious he's circling his wagons while you
all can't decide if it should be Dinelli or Heh...No brainer...elect Dinelli and he gives Paul a high paying public safety position and together they dissemble piece by piece the scrum bags that slither around on the 5th & 11th....might even bring some good ones back into the fold....signed, Xena Warrior Librarian...

Bring back Doyle and Woolover! They are good cops ---got Dangerous fleeing and armed felon ---which is what turkey neck wanted...they used 48 by using tactics taught at their academy...same academy I learned of APD tactics and when and where to use these tactics. Although I only attended the Citizen's Police Academy I learned that what they did was proper and this guy was wanted by the cops for a litany of criminal activity and he was a loose cannon and capable of killing officers on the spot! (XWL)