Who Stands to Gain the Most if Berry is Re-elected? HINT: Not the Citizens

The Albuquerque Journal endorsed Rj Berry in this past Sunday's paper but they left out a few facts which we will bring to light below:


When Richard Berry took the reins of Albuquerque almost four years ago, the city was not in a good place. It faced:
It was time for Marty Chavez to leave but the City under the Chavez administration was clean, prospering and crime was down every single year he was in office!  Things did not go to hell until Berry took over.


A $90 million budget shortfall.
The truth is; this budgets “shortfall” has been over Berry’s entire term which averages to approximately $20 million dollars a year and is mostly Berry’s fault.


Unemployment that topped 8 percent.
As reported on KOB Channel 4 (read it HERE), the real unemployment rate is around 14.1% when you take into consideration those who have “given up” looking and those who are working part-time low paying jobs.


A capital budget that had been raided for 8 mills — tens of millions of dollars a year — to cover operations, salaries and raises.
The Journal wants to talk about raids; Berry has raided the entire City budget to the tune of MILLIONS OF DOLLARS that he and his Republican Councilmen have diverted for the Berry Boutique Projects.  Remember, this is after the voters told Berry NO!


A lack of transparency regarding city spending, staffing, contracts and pay.
Let’s talk about transparency. Berry announced that RAY SCHULTZ was retiring and was placed on a consulting contract for another month. The truth: RAY SCHULTZ is STILL a City employee on vacation. Berry lied during the debate and stated, “Ray Schultz was no longer a city employee.”  This is a LIE!


Bureaucratic red tape, inequitable impact fees based on location and an over-the-top energy code that bogged down construction projects.
All of those problems still exist and Berry’s “claim to fame” is he was a “construction guy.” At that Berry has killed Albuquerque’s economy; no one is looking to build here…


A major traffic interchange well over its design capacity affecting 56 million commutes each year.
Not to worry, Berry is endorsed by the ABQ Journal; anyone wonder why, when he is a dismal failure? Here is the answer: Berry’s big push for the Paseo project with “special access” for the ABQ Journal Center will cause the Journal’s property to DOUBLE OR TRIPLE IN VALUE! This is commonly referred to as “motive and opportunity.”


And a commitment to education that amounted to little more than before- and after-school care.
Berry has done nothing to improve our educational process. Although, Berry commonly calls upon APS’s Superintendent, Winston Brook, to back his play. Brook makes over $264,000 a year for our students to have one of the worst dropout rates…Thanks Berry for nothing.


Berry came to the job with experience as a state legislator in the minority party who had little choice but to build consensus to get things done. It’s a skill that has served the city well as he has tackled each of these challenges in turn.
Served the City well? The Journal means it has served Berry and his SOB’s (Supporters of Berry) well. Berry has several pawns on the City council like: Meyers, Winters, Trudy Jones, Janice Arnold-Jones and Dan Lewis who back his immoral acts and his fleecing of the City of Albuquerque. 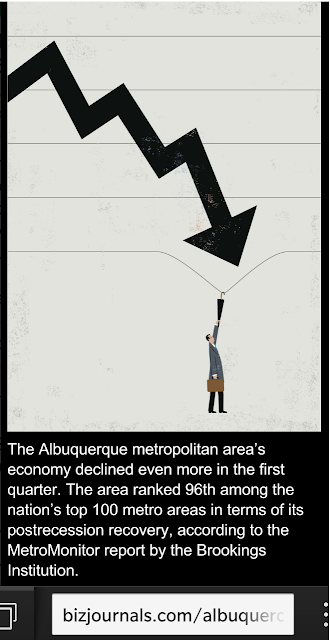 The city addressed more than $160 million in shortfalls during his term, turning in balanced budgets each year. It avoided layoffs in its city workforce, and a recovering local economy added 7,200 jobs from June 2012 to June 2013.
Wow, if Berry added 7,200 jobs what were those 7,000 plus people doing standing in line at Target to apply for 200 minimum wage jobs?  What about the 5,000 plus people who applied at the Downs Racecino for 400 minimum wage jobs? With all the “jobs” Berry claims he created our true unemployment rate shouldn’t be at 14.1%. Or is this all another Berry good Lie?


It returned an annual $3 million to the capital budget from operations, with more promised. It won awards for its ABQ View portal that put the city’s business — contracts, salaries, benefits, construction projects, internal audits, political contributions, travel expenses and more — online for its real bosses, the taxpayers.
This hogwash all sounds good but the truth is the 3 million dollars is the money that Berry and the Republican Council have diverted for the Berry Boutique project which the voters voted down.
It equalized impact fees, instituted a business center to bring information together for new and expanding companies, implemented E-Plan Review and FastTrax to streamline plan review and approval, and set up a “green path” to expedite cutting-edge building projects.
Once again, this all sound really good but the facts do NOT support this rubbish. Has Berry offered the companies who used this baloney and created the “7,000 jobs” Berry claims were created?


It built metaphoric bridges with the state and federal governments, leading the way with $50 million for the $93 million rebuild of the literal bridges of the Paseo del Norte/Interstate 25 interchange.
Remember this is your tax dollars paying to double or triple the property values for the Albuquerque Journal Center.


It housed more than 200 of the city’s most vulnerable, chronically homeless, recording an impressive 89 percent retention rate after a year and saving taxpayers hundreds of thousands of dollars on calls for police and emergency medical services.
Didn’t Hitler also send what he thought was a menace to the public to be “housed” in certain places?  We all know how that worked out. Let us know when they open one of these housing projects in FOURHILLS where Berry lives.


It joined with Sandia High School to offer an International Baccalaureate program, the University of New Mexico on a planning/architecture facility Downtown, private industry to give high school students Running Start for Careers training, Southwest Learning Center on an aeronautics/math/science academy, and Innovate + Educate on a system to get potential employees skilled up to enter the workforce.
This was set up to benefit all of the SOB’s (Supporters of Berry) friends and family.  Honestly, how many regular people really have been given these type of opportunities? Very few if any!


Has it been a term without controversy and mistakes? No. Critics especially would say he didn’t move quickly and decisively enough to address problems at APD, which seems sapped by low morale and is the target of a Justice Department probe into use of force. The number of officers is down, but so are crime rates. And Berry supported innovative reforms such as lapel cameras for officers.
Berry allowed APD to be wrecked by Ray Schultz whom is still the Chief of Police according to the City’s Record Custodian. APD was one of the best police departments in the Nation and now APD is facing a TAKE OVER by the Department of Justice. This is all a result of a lack of leadership.
Here is another huge lie Berry keeps telling. Crime is up by over 3,600; of those additional 3,600, 2,000 of those additional crimes this past year were all PROPERTY CRIMES.  Did APD make an additional 3,600 arrests?  The answer is no but we did have an additional 3,600 victims. According to Berry the crime rate is down. But, crime itself is actually up.  All the records prove this including the Journal which showed that crime has steadily increased the past three years Berry has been in office. 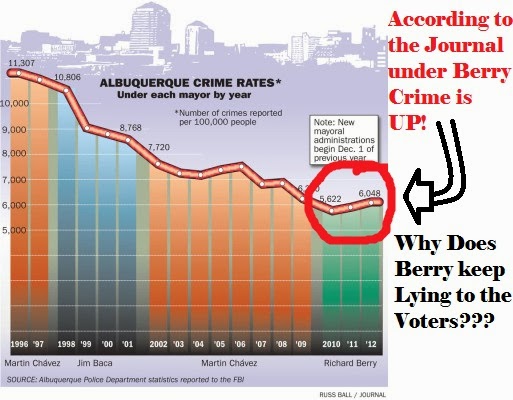 Berry has run the city more like a business than a political machine. His first CAO was a prominent Democrat.
Here is a funny!  Berry does not talk about the newly created position that he created for Trujillo as the Deputy COA.  We are out of money but Berry gives another SOB (Supporter of Berry) a $90,000 a year job to do nothing. Way to go Mr. Trujillo.


Overall, his pragmatic fiscal stewardship, his drive to propose game-changing projects and his commitment to be accountable to voters have put the city in a much better place than it was when he took office. He says he loves Albuquerque, has “a passion for the job” and wants a second term to “really improve (the city’s) value.”
Berry is not “pragmatic,” he is problematic. Berry’s boutique projects are not game-changing, they are an attempt to ruin the City’s beautiful Bosque.  Berry has no accountability to the voters; otherwise he would stop lying.  Berry does not love Albuquerque; Berry loves all of his SOB’s (Supporters of Berry) who he has done favors for like Mr. Trujillo’s $90,000 a year job to do nothing and others. Berry does not love Albuquerque half as much as he loves himself.  Berry only wants to stay another four years to make more money for him and all of his SOB’s (Supporters of Berry).


The Journal recommends voters re-elect Mayor Richard Berry so he can do just that.
The Journal will make a huge profit off of the Paseo deal plus the average $500,000 that the City of Albuquerque pays the Journal.
Berry is a bad choice and has been a dismal failure! It is time for new blood with new and fresh ideas. 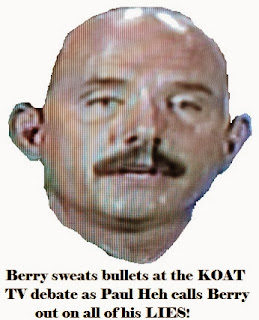 I really wish these issues would have been first and foremost in the Heh campaign. We all get that he will fix the PD, everyone accepts that. But 90% of this city is not a PO, are married to one or have a direct family member as one. So while important, it isn't the top priority of many voters. My wrangle some of you, but that is the truth.

Also, with most accounts that the dept is in shambles, a lot of people haven't felt the pain yet of it. Of course the answer is you will, and I get that. But the shock and awe of the issues, hasn't directly effected me, so I question if it is drummed up just a tad.

Heh's answers in the debate on education and trade schools was the best few minutes of any of the 3 camaign's so far (IMO)!!! That is something that relates to EVERY ABQ FAMILY. Pure Gold. Then, immediately it is back to fixing the PD....................it starts to sound like Charlie Brown's teacher after awhile.

Come on Heh, you get the PD thing in your pocket, appeal to the rest of the city PLEASE!!!!!

My sentiments exactly! Something to shock and awe the half asleep voters, would be for Heh to join forces with Dinelli and show them that he is serious and willing do what it takes to unseat Berry! He has to be in the game to make changes and then down the road when he has more name recognition and experience in politics, then he can run for Mayor. Like or hate it the name of the game is POLITICS...

To the first post at 6:17.. Just call Heh and ask him your questions. He would be more then happy to talk to you.