The Honorable Susana Martinez made a campaign promise to hold corrupt public official accountable. Chief Public Safety Officer (LIAR) Darren White is actively being corrupt by his lying and covering up his wife’s suspected DUI crash. This issue stands alone and the Eye is not talking about Brad Arensfield or Tru-touch or the other issues that are questionable.

The Eye realizes that White is a “friend” of the Governor and has “friends” in Governors office (with friends like White; who needs enemies), notwithstanding, the Governor must act decisively and cut her losses. The Governor has made a fool of herself by backing White after everyone told her what a “piece of work” he was. Even our own Mayor Berry has stated that White is a rogue employee that abides by no set of rules (SOP). 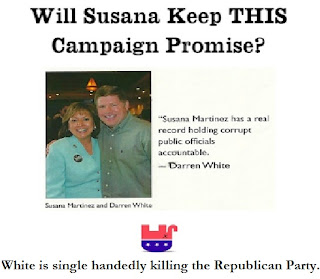 Now is the time for Governor Martinez to remove White from the Judicial Standards Commission to ensure honesty and integrity.

If this Governor has any integrity and/or honesty, it is time to prove it. The smell is only going to get worse as more facts are revealed.

If Darren has "friends" in the Govenors office, and he is putting such a black mark on the republican party, then what in the world does Darren have on these people that they are willing to put up with his destructive behavior? This whole thing stinks of BIG corruption.

This is pathetic.
The republicans that sit quite are guilty at harboring a criminal. They (City Council)might as well just lie as well. If you know something is dead wrong and sit quite on the sidelines and do not speak up, you are morally deficient.

As for Susana; it's too bad she will be a one time governor because of this pig as well.

People at DPS are saying the Martinez crew is already trying to find a place for him to make a soft landing after he resigns.

Darren is only part of the problen in our city. Schultz, Perry, Hoffman and Ramirez need to go immediately just for starters. Then maybe Berry can save his but in the next election.

He is still obligated to follow city administrative instructions related to city vehicle use. Does anyone car about the liability he put the city in? What if they were in an accident after leaving her crash?

Why would the Gov want to take him and provide a 'soft landing' for him after he resigns. He is loathed by half of the republicans and they will turn against their own kind when election time comes. McCleskey thinks he knows the Rs and how to win races, but he will under estimate and blow it for everyone running in any races.
There is no benefit to keeping him or giving him another job, just a liability. I will make it a point to cross party lines in every upcoming election.

OVER AND OVER AND OVER AGAIN THERE ARE WARNINGS TO THE Rs IN THEIR UPCOMING RACES. IF DARREN WHITE IS NOT DRUMMED OUT OF THE NEW MEXICO PARTY POLITIC, THEN THE Rs WILL SUFFER HUGE LOSSES IN THEIR CAMPAIGNS. THERE IS NO EXCITEMENT SO FAR AND THE Ds WILL TAKE OVER THE HOUSE AND SENATE HERE. DARREN LOST TO HEINRICH BADLY AND THE RIPPLE EFFECT AND ALL THAT'S HAPPENED SINCE WILL SPELL DISASTER FOR THE NEW MEXICO REPUBLICAN PARTY.
WHAT A SHAME. AND HOW SELFISH THAT ONE INDIVIDUAL LIKE DARREN WHITE, SHOULD SPOIL IT FOR THE REST. HE'S AN OUTSIDER AND IS TRULY AN EMBARRASSMENT TO US ALL, D OR R.
HE IS THE POSTER CHILD FOR IMMORALITY AND DECEPTION IN A WORLD THAT IS LACKING SO MUCH INTEGRITY AND HONESTY. WHAT OTHERS KNOW ABOUT HIS PAST ACTIVITIES WOULD MAKE MOST PEOPLE ESPECIALLY WOMEN WRETCH INTO THE SINK. THE MERE THOUGHT OF HIM SICKENS ME.

I wasn't sure about this Hoffman some of the psters referred to and then someone told me that she got a lot of publicity during that "Runaway Bride" incident, so I looked her up. I am in no position to make any comments on her morals or job performance, but in comparing the photos of her published at the time of the "Runaway" and more recent ones I thinks it's safe to assume that she knows the location of every Dairy Queen in town.

Everyone who tried to cover up this crime needs to go. Starting with Paiz and going all the way to Perry for lying at the press conference. Ray Boy has lied to the media since he returned from Scottsdale, and the media has never questioned or checked his fabricated facts. I supported Berry, however, I will work full time to make sure that he is not re-elected. We tried to tell him about White and Schultz!!!! No probable cause?? And this idiot is the Chief of Police??????????

Poster @ 10:02: I was JUST NOW saying this to a co-worker here! That whole useless bunch needs to be gone...the sooner the better. Mayor Berry: ONE TERM....

Everyone, don't bother calling the governor's office or dealing with constituent services. They have a bad reputation for not returning or phone calls or emails.

Besides that they don't have the governor's ear. Everyone knows the way to the governor is through Jay McCleskey.

She has apps on her phone for botox delivery and lip augumentation..... :0)

Darin is as corrupt as they come. Everyone warned Mayor Berry who did not listen and look what happened. I hope the Gov does not make the same mistake. She seemed to be following the same path as Berry. I hope this opened up her eyes.

Four votes of no confidence, that's unheard of. What an idiot White is. Darin has never been a real cop, just someone that goes from place to place with no ties gaining no exp. Darin, leave NM with your bride, you are finished in this state. You have done enough damage.