Sufferin’ in Suffern; New York that Is 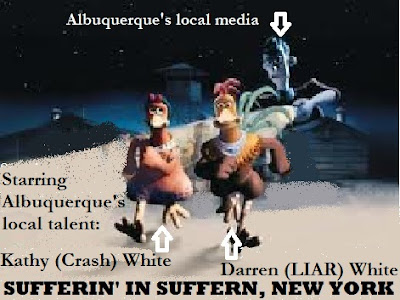 Some of our Eyes have told us that Chicken Public Safety Director, Darren White and his blushing wife have “flown from the coup.” Yes, our modern day “Bonnie and Clyde” are on the run from Albuquerque’s local media who are seeking the truth.

Our Eyes claim that White is from Suffern, New York, and White and his wife are suffering on the run. We all know that you can run but you can’t hide! Darren White has to know that the fire pit will still be red hot when even he decides to surrender to the media. We are sure he will have cooked up a few more lies to feed the public.

Our Eyes tell us that Kathy White is Darren’s “Achilles Heel.” If Kathy White tells the truth about Brad Arensfield, Tru-touch, etc… Darren is done for and he knows it! If the media got a hold of Kathy there is a strong chance that she will spill the beans. Some believe that this is why White has “removed her from the equation.”

On another front, our Eyes are telling us that the AFD folks have made a vote of no confidence on Darren White for lack of ethics. We have lost count how many times Darren White has publically received a vote of “No Confidence.”

On a side note…We all know how it ended for “Bonnie and Clyde.” Only it will not be bullets that take Darren White out, it will be the TRUTH. Maybe Darren White will man-up and tell the truth and avoid a tragic ending. This is really simple; “Tell the truth Darren White!”

Why doesn’t the Mayor get it? The Mayor needs to pull his head out of the sand and see what is going on.

BROVO to the Albuquerque City Council for taking the lead and appropriate action!

Mayor Berry is going to be interviewed by CH7 at 6PM this evening.

Mayor Berry, Gov. Martinez; it is time to stand up and FIRE WHITE! The lies have been told, and the truth is very easy to see, do the right thing and MAYBE BERRY will have half a shot at a second term.

Darren and Peaches retirement plan.....DARRENS tipsy tow we will get you home safeley from the crash scene...Drunk on drugs no problem we gotcha BABE

Mayor Berry is done and he knows it. He will never go up against White because he has no spine.

It has been mentioned that Mayor Berry's brother is also a POS. Guess he used to live in Silver city with his ex and beat her quite frequently. If Berry isn't going to do anything about that, what makes anyone think he is going to stand up to Jesus Christ Darren White?

Also, did anyone hear what Berry said about what type of "SOP" White had to follow? Apparently he has no rules or guidlines regulating him (white), or at least none that Berry is "aware of". He said that is for the IRO to figure out. WTH? You are his boss ASSHOLE! You should KNOW what type of rules he has to follow! What an incompetent POS!

Wait until the truth comes out on the entire 5th floor!!!!

Where does White's wife work and whyw as she going to gthe gym?

Wrecking on the curb, a 911 call describing the driver as "out of it" multiple times, and driver admitting to taking pills ...
no probable cause for dui investigation?

As an old lady civilian who has to put up with hands in my pants and bra just to get on an airplane, I beg the law enforcement folks here to stay on this case and not let White get away with this arrogant behavior.

Did I hear the Mayor correctly when he said that Darren did not have to follow the SOP because only sworn officers have to follow it? WOW.....thats good news for all the civilians that work at APD. You are not sworn so the SOP no longer applies to you. Hope the unions heard that.

Someone please go and look at the cameras pointed at Montgomery from businesses along the way. This will be very important data points for addressing Mr. White's statement about not running with lights.

Hold on everyone, we always said the same stuff about Chavez and he was re-elected how many times????? We say no one will vote for him and the APOA won't endorse him but you never know. Me I didn't vote for him or Chavez or for the APOA Contract,,

I hope she doesn't teach for the school on wheels!

I can't wait for the APD and AFD officers who were on scene and wrote the reports to be interviewed! That is going to be AMAZING! Good luck RJ. I hope RJ is dumb enough to wait for he IRO report to come out before Darren resigns! The longer that idiot stays in his position the more he weakens RB in everyway! And, if they force the council to have an outside investigator to uncover the truth that will also mean the end of Berry's political career. Thank you Darren you have single handedly blown up Berry's administration and made Martinez look like a fool for appointed you to oversee our judges. Job well done!
FMB

first Tru Touch and the this DUI deal! When is the mayor going to fire this dirty scum bag! This wWhite guy is a dirty politician....

Who's laws does White have to follow, so now the mayor said White is above the law.

That'S BULL SHIT!This Mayor should be fired too! No one is above the law!

I hope Ken Sanchez fires them all, he is an honest guy who will do what is right, to get rid of the scum bags, 11th floor crooks! They are bringing this city down!

I heard a crash site on the news described as being either a roll over caused by accident or not sure if a medical condition. Since when is a possible DWI described as a "medical condition?" What about the DWI drivers found guilty of DWI in the Albuquerque Journal.... is the Albuquerque Journal going to change the headline to read, "The below photos of people were found guilty in court for driving with a "medical condition." That's right... if Darren and Cathleen get away with "medical condition," as being described at the scene of a one car crash with the drugs and alcohol box checked marked on the police report, then so too ALL other NM Drivers get to describe their DWI as not being a DWI, but a "medical condition!"
Darren needs to resign in order to put the public safety back to calling a crash scene with possible drugs and alochol a back to being a possible DWI with the need for a DWI investigation on the driver to occur!

They'll be in NY for awhile. They hope this will blow over. Get something else on the news and it probably will unless AFD and APD keep at it and keep telling the truth. Can you all keep the heat on?

IN TEN MINUTES. TUNE IN