Does the Guns Disposal Program equal NEW/BETTER GUNS for Participants?

People have a right to keep and bear arms; this is guaranteed by the Second Amendment of the Constitution.  We here at the Eye received many emails from citizens whom were critical about the Eye’s story about the City’s attempt to disarm the citizens of Albuquerque.  We still stand by our claim and statements in regards to the Gun Disposal Program but we found there is more to the story and there is a positive spin on it. We have a clear affection for guns and the gun “buyback” programs that help people become better armed. 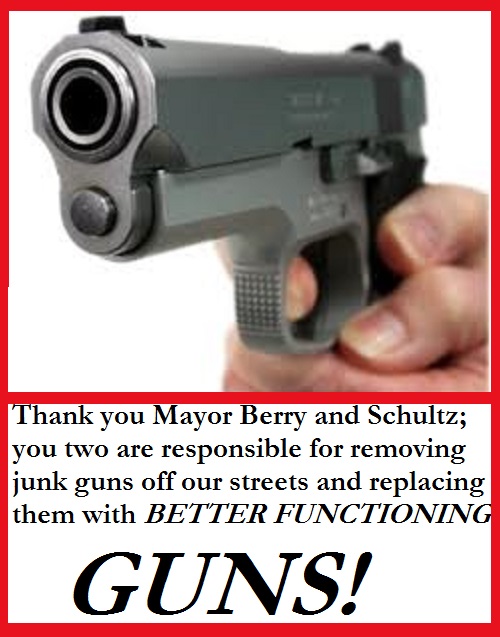 Our readership sent us several emails telling us to leave our criticism of the programs alone.  The leading reason for turning in a gun; people are turning in their junk (broken) firearm’s which are basically worthless and receiving monetary compensation.  What a DEAL; RIGHT!  Several of our readers told us they used this money to go out and purchase a new functional gun or ammunition to another firearm. Way to go Berry and Schultz.  The APD version went broke quickly but other agencies have kicked in some “bucks” (that’s for all of our hunters).

In a recent Journal article titled, “Gun buybacks: Do they work?” By Leslie Linthicum (Read it HERE), the reporter stated the following:

[The National Research Council, in a massive review of firearms and violence in 2004, examined gun buybacks and their theoretical premise – “that the program will lead to fewer guns on the streets because fewer guns are available for either theft or trade, and that consequently violence will decline.”

It found that theory lacking and explained why. First, the guns that are turned in tend to be older and sometimes barely functioning and they are by definition unwanted – not the type of guns likely to be used in a crime. Second, replacing guns is easy. And third, the statistical likelihood that any one gun will be used in a crime is tiny.]


So, although we here at the Eye view the “Weapons Disposal Program” as the first step to a communist like Berry to try and disarm the Citizens of Albuquerque; there is a benefit for our citizens for now.
Posted by Stealth at 3/11/2013 06:07:00 AM